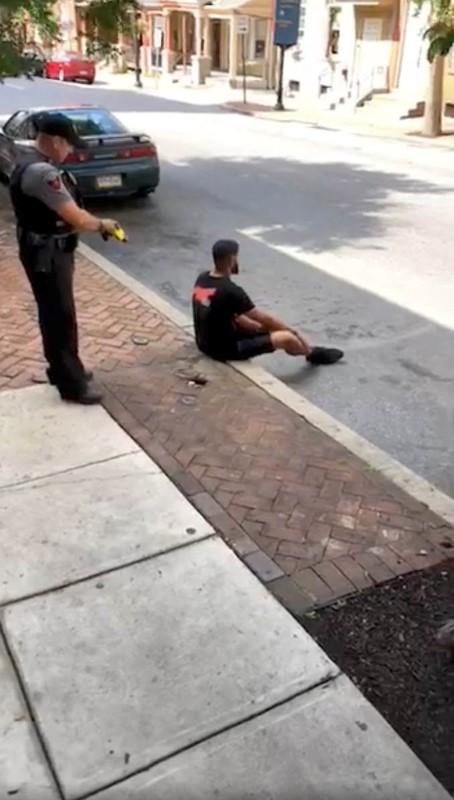 (Reuters) – A Pennsylvania police officer is under investigation after he was caught on video using a stun gun on an unarmed black man who was sitting on a curb.

A man sits on a curb, moments before getting Tasered by a police officer, in Lancaster, Pennsylvania, U.S., June 28, 2018, in this still image taken from a video obtained from social media. MANDATORY CREDIT. Jay Jay/via REUTERS

The video here was captured by a bystander on Thursday in Lancaster, Pennsylvania and posted on Facebook. It has since received 2.4 million views and is the latest incident to spark a public outcry in the United States over excessive use of force by police against black men.

Lancaster Mayor Danene Sorace said in a statement here she was “upset” by the images and an investigation was underway into the use of force in the incident.

Police stopped the man, Sean D. Williams, 27, on Thursday while responding to a 911 call about a man with a baseball bat who had pursued another person, according to a report from the police bureau here

The video shows Williams sitting on a curb, being repeatedly asked to straighten his legs by Lancaster City Police Bureau Officer Philip Bernot.

Williams begins to follow the white officer’s directions then folds his legs up under himself again, at which point Bernot fires his stun gun and Williams writhes around in pain.

Lancaster police said the stun gun, widely referred to as a Taser due to its brand name, was used because Williams failed to follow instructions.