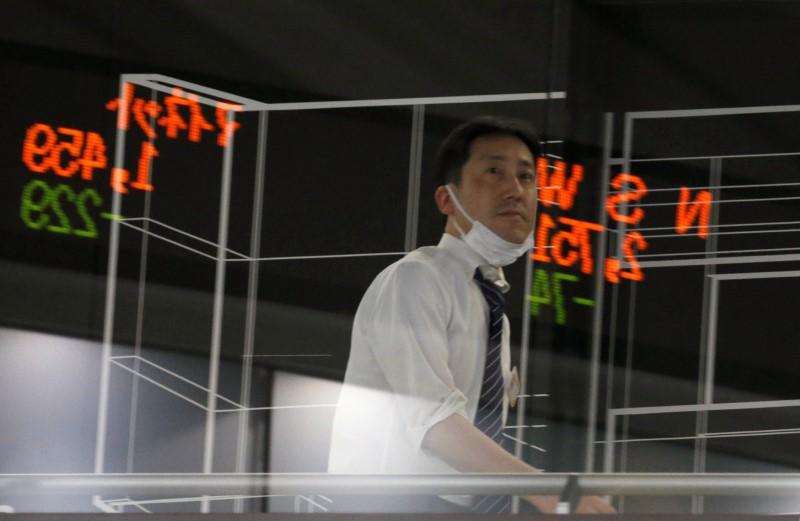 FILE PHOTO: A visitor is seen as market prices are reflected in a glass window at the Tokyo Stock Exchange (TSE) in Tokyo, Japan, February 6, 2018. REUTERS/Toru Hanai

Dealers said the seemingly clear win would at least settle one source of political uncertainty. Yet leftist Obrador is also expected to inject a dose of nationalism into government and sharpen divisions with U.S. President Donald Trump.

Oil prices had taken an early spill after Trump tweeted that Saudi Arabia had agreed to lift oil production by “maybe up to 2,000,000 barrels”.

The missive was later downplayed by the White House and Saudi Press Agency.

In share markets, Japan’s Nikkei .N225 dipped 0.1 percent, with a survey of manufacturers showing sentiment had darkened a shade in the face of trade war threats.

MSCI’s broadest index of Asia-Pacific shares outside Japan .MIAPJ0000PUS was a fraction firmer in early trade. The index shed 2 percent last week as trade concerns clouded the outlook for Chinese growth and pressured asset prices there.

Tension is growing ahead of a July 6 deadline when the U.S. is due to impose US$34 billion of tariffs on Chinese exports.

“The key risk for the market isn’t that Trump actually implements his trade threats but rather that a protracted period of trade uncertainty begins to weigh on economic activity,” said analysts at JPMorgan in a note.

“The evidence suggesting this is happening is far from conclusive, but ominous data points are accumulating.”

A survey out over the weekend showed Chinese manufacturing activity cooled a little in June as export orders fell. The official Purchasing Managers’ Index (PMI) eased 51.5 in June, from 51.9 in May.

A slew of readings on manufacturing across the globe are due later on Monday, while the U.S. ISM report is out on Tuesday. Minutes of the last Federal Reserve policy meeting come on Thursday and the week closes with U.S. payrolls for June.

The currency then bounced on news Seehofer had offered to step down as minister and as chair of his Christian Social Union (CSU) party.

The move makes the future of Merkel’s government even more uncertain as her Christian Democrats party (CDU) relies on the CSU to maintain power through a coalition formed three months ago to end a political vacuum.