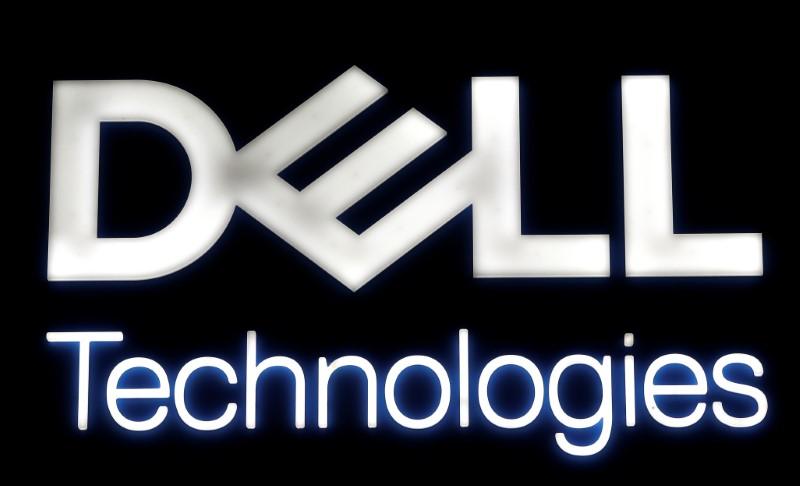 (Reuters) – Dell Technologies Inc said on Monday it would pay $21.7 billion in to buy back shares tied to its interest in software company VMware Inc (VMW.N), paving the computer maker’s way back to the public market without an initial public offering.

A logo of Dell Technologies is seen at the Mobile World Congress in Barcelona, Spain February 28, 2018. REUTERS/Yves Herman

Dell said the cash and stock deal will value its equity at between $61.1 billion and $70.1 billion, more than twice the $24.9 billion that founder and Chief Executive Michael Dell and buyout firm Silver Lake paid to take company private in 2013.

The transaction will allow Dell to bypass the traditional IPO process, which would likely have involved grilling by stock market investors over its $52.7 billion debt pile.

It also means Dell will not have to raise any new money, because it will pay for the deal by issuing new shares and a $9 billion dividend it will receive from VMware.

Going public gives Michael Dell and Silver Lake the option to eventually sell down their stakes, even as they affirmed on Monday they had no plans to do so. Following the deal, Michael Dell will own 47 percent to 54 percent of the combined company, while Silver Lake will own between 16 percent and 18 percent.

A new public security gives Dell currency it can use to pay for acquisitions beyond cash. The security which Dell is buying back is a so-called tracking stock tied to its 81 percent economic stake in VMware. VMware specializes in virtualization, a technology which allows multiple systems and applications to run at the same time on the same server, which can cut companies’ IT costs.

Dell issued the stock in 2016 to buy data storage company EMC Corp for $67 billion, because it could not pay for the whole deal in cash. EMC owned the majority stake in VMware, which Dell inherited.

Such a security “tracks” or depends on the financial performance of a specific business unit or operating division of a company rather than the operations of a company as a whole.

Dell will exchange each share of VMware tracking stock (DVMT.N) for 1.3665 shares of its Class C common stock, or $109 per share in cash for a total cash consideration of not more than $9 billion.

Dell said it will list its Class C shares on the New York Stock Exchange following the completion of the deal that will eliminate its tracking stock. Following the deal, investors who owned the tracking stock will in aggregate account for between 20.8 percent and 31 percent of Dell’s ownership.

The transaction represents a premium of 28.9 percent to the closing price of the tracking stock on Friday. The stock was up 10 percent at $93 in afternoon trading. VMware shares also rose 10 percent to $161.75.

“We believe that this development is positive for VMware shares not only because it avoids the reverse merger scenario, but also because there is the possibility of VMware being taken out by Dell in the future as a ‘second step’ following this transaction,” FBN Securities analyst Shebly Seyrafi wrote in a note.

A STRING OF DEALS

Michael Dell has turned to dealmaking to transform his company from a PC manufacturer into a broader seller of information technology services to businesses, ranging from storage and servers to networking and cyber security.

His strategy is in sharp contrast to that of rival HP Inc (HPQ.N), which separated in 2016 from Hewlett Packard Enterprise Co (HPE.N), based on the reasoning that having two technology companies focusing separately on hardware and services would make them more nimble.

Dell’s strategy is beginning to pay off, as companies look to one-stop shops to help them manage their IT infrastructure on the cloud. Dell reported consolidated adjusted cash flow of $2.4 billion in its latest quarter, up by a third year-on-year. Its total debt has also gone down by $4.6 billion since the EMC deal.

“Dell is a very different company than it was five years or so years ago. And we’re seeing tremendous momentum inside the business,” Michael Dell told analysts on a conference call.

Dell had also said earlier this year it was considering a full merger with VMware. However, a special committee of VMware’s board of directors formed to safeguard the interest of VMware minority shareholders pushed back against the terms that Dell was proposing, according to sources familiar with the matter.

Reporting by Carl O’Donnell in Bangalore and Munsif Vengattil in Bengaluru; Editing by Bernard Orr and Saumyadeb Chakrabarty