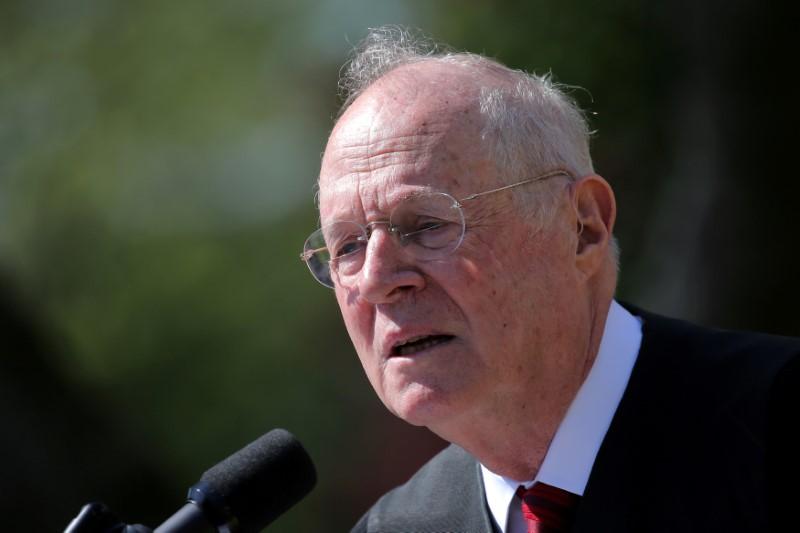 WASHINGTON(Reuters) – In a hotly contested case before the U.S. Supreme Court three years ago, Justice Anthony Kennedy cast the deciding vote to uphold the broad scope of race discrimination claims that can be brought under the Fair Housing Act.

FILE PHOTO: Supreme Court Associate Justice Anthony Kennedy speaks during a swearing in ceremony for Judge Neil Gorsuch as an associate justice of the Supreme Court in the Rose Garden of the White House in Washington, DC, U.S., April 10, 2017. REUTERS/Carlos Barria/File Photo

While Kennedy’s legal decisions were often friendly to corporate interests, his rulings – as in the Fair Housing case – sometimes went against them, especially in cases involving civil rights and environmental regulation.

Now, his impending departure from the court, announced on Wednesday, has raised hopes among some business interests that his replacement will be more consistently in their corner.

“Kennedy was not doctrinaire and was sometimes unpredictable. The outcomes of his decisions weren’t consistently pro-business or consistently anti-business. He took every case as it came to him,” said John Elwood, a Washington lawyer who previously served as a law clerk to Kennedy.

Kennedy will be replaced with a justice selected by President Donald Trump, who has said he will make his choice from a shortlist of conservative judges.

One area in which that could lead to more business-friendly decisions is in “disparate impact” litigation, a concept at the core of the Fair Housing Act fight.

Under the principle, lawsuits can be won when an action has an outsized negative effect on a specific ethnic, racial, gender or other group, even if there is no evidence of discriminatory intent.

The court’s jurisprudence is unlikely to change radically on some other business matters, since Kennedy was generally a reliable vote for corporate interests on issues such as curbing class action lawsuits by consumers and employees and endorsing the increasing use of arbitration agreements.

The disparate impact question, however, could return to the court in various forms. There is currently litigation in lower courts, for example, over whether such claims can be brought against companies that insure homeowners.

“The banking and insurance industries have set their sights on attacking the disparate impact standard,” said Kristen Clarke, president of the Lawyers’ Committee for Civil Rights Under Law. She urged senators to grill Trump’s nominee on the issue during the Senate confirmation process expected later this summer.

Another area where business interests could benefit from Kennedy’s departure is on the scope of federal regulatory authority over bodies of water. Construction companies, including homebuilders, have long sought to limit the circumstances in which they are required to obtain federal permits under the Clean Water Act for their projects.

Kennedy wrote a key opinion in a 2006 case in which the court sought to define the limits of federal jurisdiction in such matters, but the decision had no clear majority and left the law unsettled.

Four justices joined an opinion by conservative Justice Antonin Scalia limiting the circumstances in which the Clean Water Act applies. The crucial fifth vote was provided by Kennedy, but he wrote a separate opinion setting out a less stringent test than Scalia’s. Because his vote was decisive to the outcome, most courts have deferred to Kennedy’s view.

The issue is still being litigated, and a new justice who agreed more fully with the other four conservative justices could change that.

“Should the issue reach the court, Justice Scalia’s restrictive view of Clean Water Act jurisdiction … will become the law of the land,” said Andrew Grossman, a lawyer who represents corporate interests.

Another long-time goal of businesses has been to limit the power of federal agencies, a sentiment the Trump administration shares. Although Kennedy had recently suggested his thinking was heading in that direction, his rulings were mixed, and business groups hope Trump will appoint a justice who sees the issue as the administration does.

Court watchers caution, however, that a judge’s decisions aren’t always predictable in advance.

“Generally one would think if you have a conservative justice, probably they would be of like mind but that’s not a 100 percent guarantee,” said Pratik Shah, a Washington lawyer who argues cases at the Supreme Court.