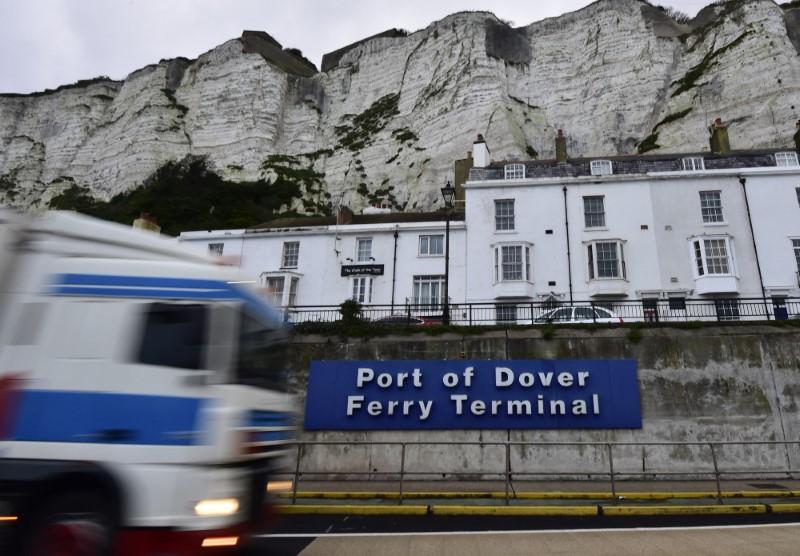 LONDON (Reuters) – Prime Minister Theresa May’s advisers have come up with a new proposal for handling customs with the EU after Brexit as lawmakers in her party bicker before a crunch meeting of senior ministers on Friday.

A cargo lorry arrives at the Port of Dover in Britain January 9, 2016. REUTERS/Toby Melville

With less than nine months left before the country leaves the European Union, little is clear about how trade will flow as May is still trying to produce a customs plan that her divided Conservative Party can agree on.

May, who leads a minority government dependent on the support of a small Northern Irish party, has ruled out staying in the EU customs union, which groups EU members in a duty-free area where there is a common import tariff for non-EU goods.

So far, May’s advisers have come up with two options, neither of which have the full support of her party.

As EU negotiators await the long-delayed proposal from London, the BBC reported that British officials have come up with a third model, though no details were immediately available and May’s office declined to comment on the report.

May will gather the squabbling ministers at her Chequers country residence on Friday for an “away-day” aimed at agreeing the contents of a “white paper” policy document.

“Our white paper will set out detailed proposals for a sustainable and close future relationship between the UK and the EU,” she told parliament. “It will mark an important step in delivering the (referendum) decision of the British people.”

Earlier, May’s spokesman said he would not comment on the speculation about a third option.

Before the away-day, May will meet Dutch Prime Minister Mark Rutte on Tuesday and German Chancellor Angela Merkel in Berlin on Thursday.

Brussels has poured scorn on both concepts raised so far by the government. Under one, Britain would collect tariffs on imports from outside the bloc on the EU’s behalf. The other would implement a technology-based plan.

May said there were still real differences with the EU over how to handle Northern Ireland, but that she was committed to avoiding controls on the border between the British province and the Irish Republic, which will remain in the EU.

She also said she could not accept any proposal which could create a “hard” border between Northern Ireland and the rest of the United Kingdom, appearing to rule out options that involve special customs rules for the province.

In a sign of the problem May faces in uniting factions of her party, pro-Brexit members of parliament asked her whether Britain would really leave the EU while pro-European lawmakers urged her to strike a deal to protect business.

Under the current timetable, both London and Brussels are working towards a final Brexit deal in October to give enough time to ratify it by Brexit day in March 2019.

In a sign of just how worried big business is getting, Siemens (SIEGn.DE), Airbus (AIR.PA) and BMW (BMWG.DE) have publicly cautioned Britain in the past month that their businesses will be hurt by a disorderly Brexit.

A record 75 percent of major British companies are now pessimistic about Brexit, a survey showed on Monday, highlighting weak investment and waning expectations for sales.

May has so far shown some skill at keeping her dual negotiation with the EU and her lawmakers on track, though the 30-year schism inside her party over Europe helped to sink the premierships of Margaret Thatcher, John Major and David Cameron.

More than 30 Conservative lawmakers have signed a letter demanding May “get tough” in negotiations.

Lawmaker Jacob Rees-Mogg, who heads a pro-Brexit faction, pressed May on the type of Brexit she should seek, setting out what kind of deals lawmakers would reject.

“Any attempt by the EU to impose its laws and Court on the UK, either directly or indirectly, must be rejected,” he wrote in the Daily Telegraph.

The article drew a rebuke from Alan Duncan, a Foreign Office minister, who said he was being insolent. “Lecturing and threatening the PM is just too much,” Duncan said on Twitter. “Risks debasing govt, party, country & himself. PM must be given maximum latitude & backing.”