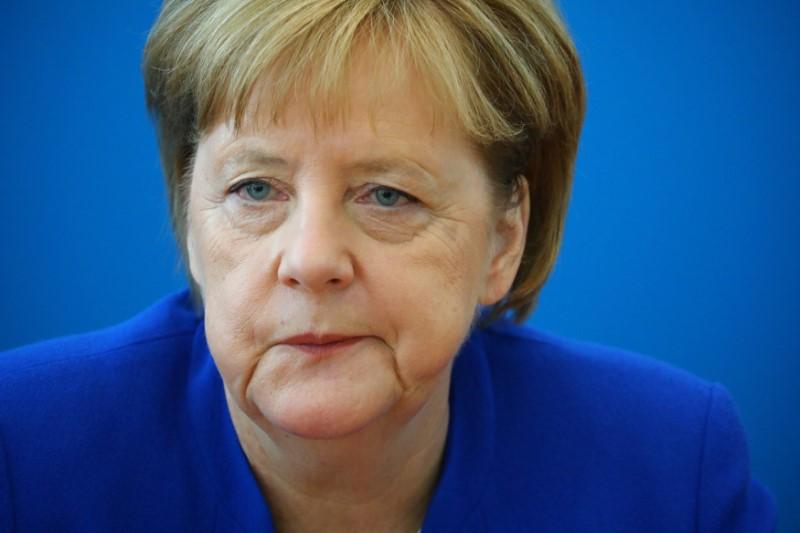 BERLIN (Reuters) – German Chancellor Angela Merkel made a last-ditch effort to resolve a row over migrant policy with her conservative allies on Monday after a top minister threatened to resign, casting doubt on whether her coalition can survive.

Interior Minister Horst Seehofer offered to quit his cabinet post and the chairmanship of Bavaria’s Christian Social Union (CSU) at a party meeting on Sunday. It was unclear whether this was high-risk brinkmanship aimed at making Merkel back down or whether he has simply had enough.

The CSU had threatened to impose new controls at the German border this week if they deemed that agreements and proposals Merkel brought back from a European Union summit were insufficient to ease the migrant burden.

Merkel is deadset against unilateral action by the authorities in Bavaria, the main entry point for migrants into Germany, saying it goes against European law.

Seehofer was later persuaded by party colleagues to talk to Merkel one last time on Monday to try to settle the dispute, declaring he would make his final decision within three days.

Merkel’s Christian Democrats (CDU) rely on the CSU to maintain power through a coalition, also including the Social Democrats, formed three months ago after an election in September.

The ructions in Berlin put pressure on the euro currency on Monday and Germany’s top share index opened more than one percent lower.

Merkel and Seehofer are due to meet later in the day. Before that, a joint session of the CSU and CDU parliamentary groups is scheduled to take place, although there was some doubt whether it would go ahead.

CDU lawmakers are still backing Merkel. But the CSU is split itself on how far to push the row with the CDU, and faces a tough regional election in October with a strong challenge from the far-right Alternative for Germany (AfD).

By letting the CSU tear itself apart over its future in the coalition, Merkel may yet rid herself of a formidable foe in Seehofer – as she has with a string of other top conservatives in her 12-1/2 years in office.

Seehofer, 68, a combative figure who tends to speak with a smile, has been a thorn in her side for years, especially over her open-door migrant policy and the last three years have been punctuated by a series of showdowns between the two.

He told colleagues on Sunday he saw no alternative to turning migrants back at the border despite Merkel’s efforts in Brussels last week and that discussions with the chancellor had been fruitless, according to a party source.

Some party meetings got underway on Monday as CDU lawmakers lined up to urge compromise. “This is democracy, and both sides must move,” senior CDU lawmaker Carsten Linnemann told broadcaster ZDF.

Veteran CDU lawmaker and former finance minister Wolfgang Schaeuble warned that the conservative bloc was standing on the edge of abyss and called for both sides to agree.

Even Bavarian premier Markus Soeder, known to take a tougher line on migrant policy even than Seehofer, said reaching a solution was very important. “One thing is clear: the stability of the government is not a question for us,” Soeder said, adding that he was surprised Seehofer offered to quit.

If the row is not resolved, the 70-year old CDU-CSU alliance may break up, robbing Merkel of her parliamentary majority. This could see her trying to lead a minority government, or seek a new election.

Merkel would be only two seats short of a majority in the Bundestag lower house and may choose to rely on the Greens or pro-business Free Democrats to back her on individual policies, or possibly try to agree a more formal alliance.

She could also call a vote of no confidence, which she may win or which may trigger a new election. Opinion polls suggest the AfD would be the biggest winner in any fresh vote.

Even if Merkel, once Europe’s most powerful leader, limps on as chancellor, she is widely seen as having lost control of her parliamentary group and her authority is waning.