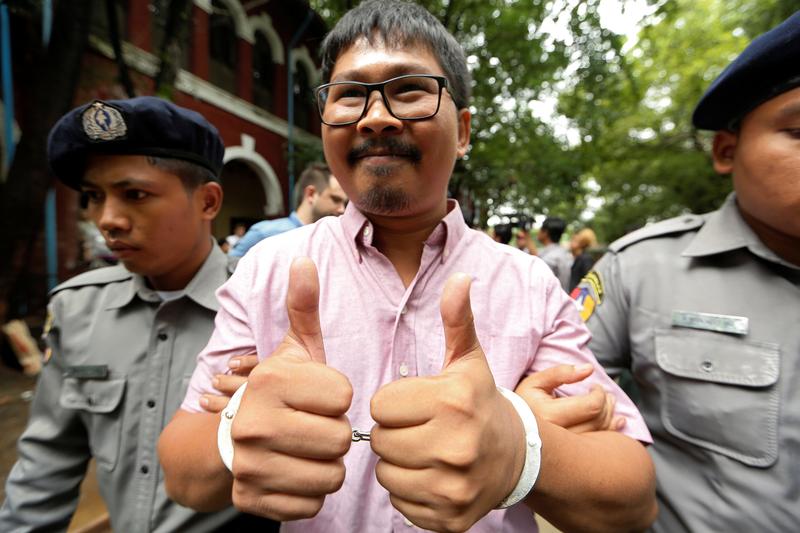 YANGON (Reuters) – A Myanmar court will rule next week on whether to charge two Reuters reporters accused of obtaining secret documents, after prosecutors and defense lawyers delivered final arguments on Monday in the pre-trial phase of the landmark case.

The court in Yangon has been holding hearings since January to decide whether Kyaw Soe Oo, 28, and Wa Lone, 32, should be charged under the colonial-era Official Secrets Act. A conviction under the act carries a maximum penalty of 14 years in prison.

At the time of their arrest in December, the reporters had been working on an investigation into the killing of 10 Rohingya Muslim men and boys in a village in western Myanmar’s Rakhine State. The killings took place during a military crackdown that U.N. agencies say led to more than 700,000 Rohingya fleeing to neighboring Bangladesh.

Defense lawyers asked the judge to throw out the case, arguing the prosecution had failed to provide sufficient evidence to support the charges. They said the reporters were arrested in a sting operation by the police that was aimed at blocking their reporting.

“Journalists Wa Lone and Kyaw Soe Oo were the victims of an orchestrated scheme by some members of the security forces to trap them and silence truthful reporting. Their six-month imprisonment is an ongoing miscarriage of justice that violates Myanmar’s stated commitment to the rule of law,” defense lawyer Khin Maung Zaw told judge Ye Lwin.

The defense lawyer said the prosecution has neither established how the alleged documents had come into the reporters’ possession, nor showed how they posed a threat to national security.

It also did not name the “enemy” the reporters were allegedly aiming to support, Khin Maung Zaw said. The information in the documents had already been made public and therefore was not secret, he said.

Lead prosecutor Kyaw Min Aung urged the judge to charge the reporters. He said the documents found on them pertained to the movement of the security forces, while those found on their mobile phones ranged from confidential to top secret.

“The information in the documents could be used to attack Myanmar security forces and the reporters knew it better than other people,” Kyaw Min Aung said.

He also argued the prosecution did not have to prove the reporters aimed to harm national security and that it could be inferred from the fact that they possessed secret documents.

Judge Ye Lwin said he would announce his ruling at the next hearing, on July 9.

“At this critical juncture, we hope that the court will decline to charge Wa Lone and Kyaw Soe Oo and order their prompt release,” said Reuters President and Editor-in-Chief Stephen J. Adler in a statement.

“Freedom of the press is essential in any democracy, and to charge Wa Lone and Kyaw Soe Oo under these circumstances, without any proof of their having done anything unlawful, would seriously undermine Myanmar’s constitutional guarantee of free speech.”

Kyaw Min Aung, the prosecutor, declined comment after the hearing.

Myanmar government spokesman Zaw Htay has declined to comment throughout the proceedings, saying Myanmar courts were independent and the case will be conducted according to the law.

Throughout Monday’s hearing, Kyaw Soe Oo’s two-year-old daughter kept grabbing her father’s collar as he hugged and kissed her. Pan Ei Mon, Wa Lone’s wife who is expecting their first child, sat closely behind him during the proceedings and held his arm.

The reporters have told relatives they were arrested almost immediately after being handed some rolled up papers at a restaurant in northern Yangon by two policemen they had not met before.

“The reporters’ unintentional, momentary possession of papers, wrongfully planted on them by police as part of an orchestrated trap, and without any knowledge of their contents, cannot be a basis for criminal charges under the Official Secrets Act,” defense lawyer Khin Maung Zaw told the court.

In April, Police Captain Moe Yan Naing testified that a senior officer had ordered his subordinates to plant secret documents on Wa Lone to “trap” the reporter.

After his court appearance, Moe Yan Naing was sentenced to a year in jail for violating police discipline and his family was evicted from police housing. Police have said the eviction and his sentencing were not related to his testimony.

Senior police officials have dismissed the testimony as untruthful.

Wa Lone said after the hearing that the prosecution had not been able to show that he and Kyaw Soe Oo had broken the law.

“We believe that the court will make a fair decision for our nation, for law and order, and for justice,” he told reporters.

Writers, press freedom and human rights activists around the world have rallied on behalf of the imprisoned reporters, with the United Nations and several Western countries calling for their release.

Reporting by the Yangon bureau; Editing by Raju Gopalakrishnan