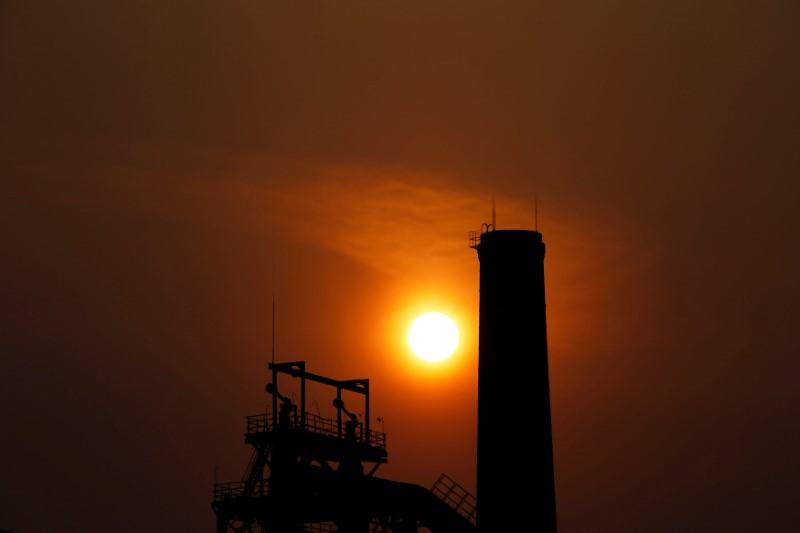 BEIJING (Reuters) – China’s top steelmaking city Tangshan plans to halve the number of its steel producers by 2020 and eliminate inefficient equipment, in its latest push to consolidate its steel sector and help clear one of the country’s most polluted cities.

FILE PHOTO – The sun sets behind a chimney of a steel mill in Tangshan, Hebei province February 18, 2014. REUTERS/Petar Kujundzic/File Photo

China’s four-year war on pollution has targeted major industries including steel and coal, with President Xi Jinping vowing in May that he would use the full might of the Communist Party to reverse damage to the environment.

Tangshan is home to 64 steelmakers in China’s northern province Hebei, producing 91.2 million tonnes of crude steel in 2017, or 11 percent of the country’s total output.

The city aims to keep less than 30 steel companies by 2020 and cut it further to around 25 by 2025, said an official at Tangshan’s Industry and Information Technology Bureau who declined to be named because he was not authorized to speak with media.

“Those who fail to meet environmental and efficiency standards will be shut, and also those that cannot convert from road transport to rail by 2020,” the official told Reuters by phone.

Tangshan also plans to phase out blast furnaces with annual production capacity of less than 1 million tonnes, by 2020, the official said. Converters, also used in steelmaking, with annual capacity below 1.15 million tonnes and sintering machines smaller than 180 square meters will be scrapped, he added.

China will shift the transport of mineral ore, coke and other commodities between ports in northern China and inland areas to rail or water from road before the winter heating season in 2020.

A rail line connecting Tangshan to Caofeidian port, a major iron ore discharging port in northern China, opened over the weekend after three years of construction, according to local media.

Tangshan’s latest plan is in line with Hebei’s target of pursuing “high-quality development” to find alternative sources of economic growth while cracking down on polluters.

Tangshan is one of China’s smoggiest cities although it has cut its concentration of small breathable particles, known as PM2.5, by 10.8 percent last year.