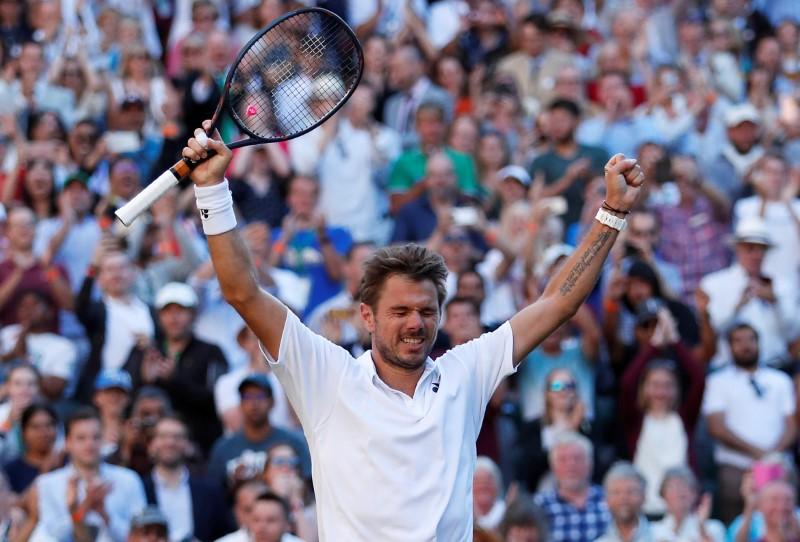 The Swiss, whose ranking had dropped to 225 after a knee injury, fought a stubborn and determined match from the baseline to down the 27-year-old Bulgarian, who appeared beset by first-round nerves.

It was a tough draw for Dimitrov but it looked like being a straightforward task for the 27-year-old Bulgarian after he wrapped up the first set in less than half an hour.

Wawrinka is nothing if not tenacious, however, and he fought for every point, becoming more and more comfortable as the match went on.

By contrast Dimitrov became more tense and inconsistent. He failed to convert two set points in the second set and that appeared to knock his confidence, allowing Wawrinka back into the match.

Dimitrov suffered again at the end of the third set. After breaking serve early, he dropped his own while serving for the set. John McEnroe, who was commentating, described it as choking.

Wawrinka’s long experience paid off in the two tiebreaks. The 33-year-old, who has won every Grand Slam but Wimbledon, was steady and cool, sending down rasping groundstrokes from both sides of the court.

His intensity and focus continued into the fourth set, which he captured on Dimitrov’s serve when the Bulgarian could only tip a powerful return into the net.

“My goal was to really fight and focus on my game,” Wawrinka said. “Mentally it was a big surprise to fight so well after losing the first set.”

The Swiss said his knee had held up well but he was sure he would be tired after the match which lasted two hours 45 minutes.

“I will do everything to be ready for the next round,” said Wawrinka, who will now face Italian qualifier Thomas Fabbiano. “I’m looking forward to it.”