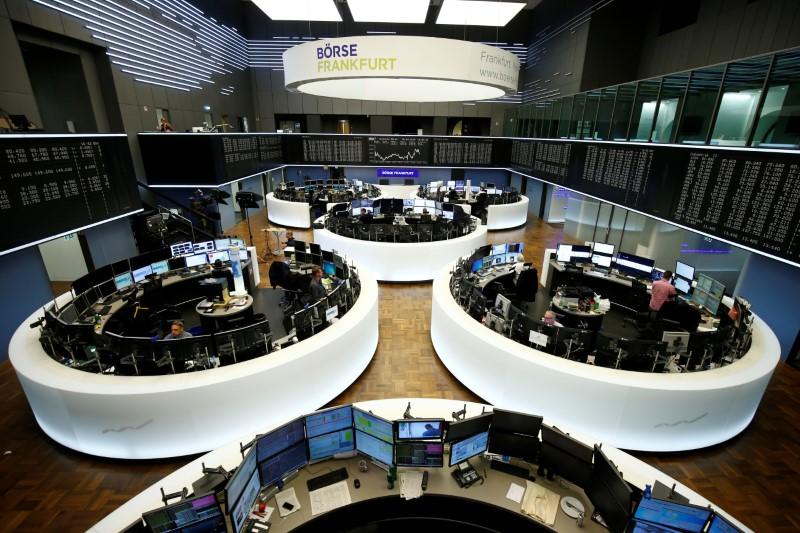 LONDON (Reuters) – A renewed slide in Chinese shares and a sobering set of factory surveys sucked world shares lower on Monday, while European markets and the Mexican peso were both jolted by political developments at home.

It was the first day of the new month, quarter and half-year but there was no let up for bruised investors after the worst start to a year for world shares since 2010.

Shanghai’s bear market lurch had continued overnight, with losses of up to three percent [.SS] as firms await some $34 billion of U.S. tariffs on Chinese goods this week and as new business surveys showed some worrying signs of deterioration.

Europe started with a thud too, with the pan-European STOXX 600 index dropping 1 percent and the euro down 0.5 percent against the dollar at $1.1630 EUR=EBS as the stability of Germany’s coalition government remained in focus.

Trade war worries were also being compounded by an EU threat to hit the United States with almost $300 billion in retaliatory tariffs and by data which had showed the weakest euro zone manufacturing growth in 18 months.

Europe was also facing the impact of a threat to Chancellor Angela Merkel’s German ruling coalition.

“There are a lot of uncertainties out there,” said Rabobank’s Head of Macro Strategy Elwin de Groot.

“It is pretty unclear what is going to happen in Germany and the trade concerns are really top of mind at the moment, so we are seeing quite a lot of weakness in emerging markets.”

All the concerns meant more demand for safe-haven bonds. U.S. Treasuries and German Bund both saw buying while E-Mini futures for Wall Street’s S&P 500 ESc1 followed Europe and Asia’s lead with a loss of 0.5 percent.

Shanghai blue chips .CSI300 had resumed their slide with a fall of 2.9 percent that soured sentiment across the region. MSCI’s broadest index of Asia-Pacific shares outside Japan .MIAPJ0000PUS fell 0.6 percent, adding to a 2 percent drop last week.

Japan’s Nikkei .N225 shed 2.2 percent to an 11-week low, with a survey of manufacturers showing sentiment had darkened a shade in the face of trade war threats.

Tension is growing ahead of a July 6 deadline when Washington is due to impose US$34 billion of tariffs on Chinese exports.

“The key risk for the market isn’t that Trump actually implements his trade threats but rather that a protracted period of trade uncertainty begins to weigh on economic activity,” said analysts at JPMorgan in a note.

“The evidence suggesting this is happening is far from conclusive, but ominous data points are accumulating.”

Two surveys of Chinese manufacturing out in the last few days showed a softening in activity, partly due to softness in exports.

A slew of factory readings from across the globe are due on Monday, while the U.S. ISM report is out on Tuesday. Minutes of the last Federal Reserve policy meeting come on Thursday and the week closes with U.S. payrolls for June.

In currency markets, the euro took an early knock on reports German Interior Minister Horst Seehofer had rejected a migration deal Merkel negotiated at an EU summit on Friday.

The currency then partly bounced on news Seehofer had offered to step down as minister and as chair of his Christian Social Union (CSU) party, only to backslide again after the euro zone manufacturing data.

Seehofer’s move makes the future of Merkel’s government even more uncertain. Her Christian Democrats (CDU) rely on the CSU to maintain power through a coalition formed three months ago to end a political vacuum.

Dealers said the clear win might settle one source of political uncertainty, but Obrador was also expected to sharpen Mexican divisions with U.S. President Donald Trump.

After an initial retreat, the dollar soon rebounded to be up at almost 20 pesos MXN=, up from last week’s trough around 19.5580.

Trump also loomed large in oil markets with crude taking a spill after he tweeted that Saudi Arabia had agreed to lift oil production by “maybe up to 2,000,000 barrels”. [O/R]

The missive was later downplayed by the White House and Saudi Press Agency.