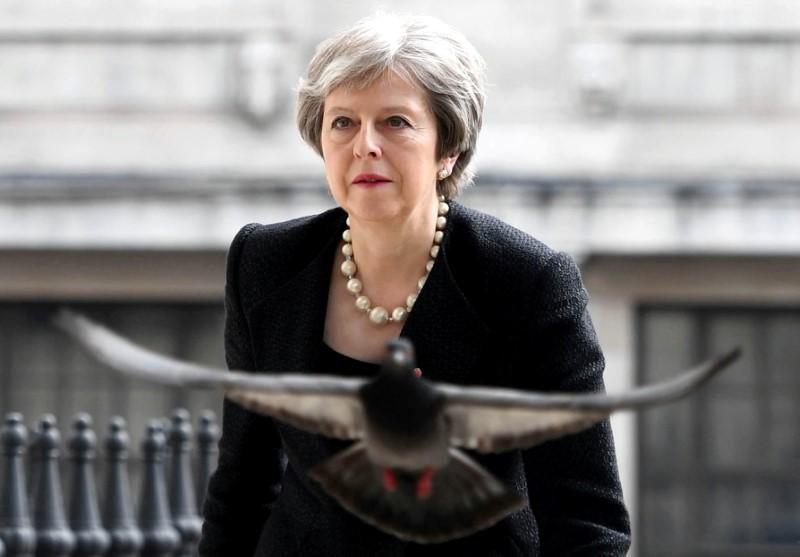 LONDON (Reuters) – Prime Minister Theresa May has called on her Conservative Party to “stand together” over Brexit, days before a crunch meeting she hopes will overcome bitter rifts over how Britain should leave the European Union.

Britain’s exit from the bloc will mark its biggest trading and foreign policy shift in almost half a century. But May has struggled to unite her ministers and party — or parliament and the public — around a plan, often reluctant to spell out her approach for fear of angering one faction or another.

With the clock ticking towards a March departure date and passions running high, May needs to thrash out a deal with her ministers on a future customs arrangement with the EU. The meeting at her country residence, Chequers, on Friday is expected to run well into the evening.

It is unclear what May will present to her cabinet, but those wanting a “clean break” with the EU fear she will try to force them into a compromise on customs that will keep Britain firmly in the bloc’s sphere, as desired by some companies and several ministers.

At a cabinet meeting on Tuesday, May said she “looked forward to the full discussion which will take place at Chequers on Friday, when decisions will be taken on the future partnership the UK is seeking with the EU”.

But just hours before, May had appealed to her party at a Conservative fundraising event not to allow the scale of the Brexit challenge to “overwhelm us”.

“The stakes are high. Perhaps higher than we have ever known in our political lifetimes. We each have a choice to make,” she said at the fundraiser on Monday, according to her office.

“Will we come together and stand together as a party, as a government and as a country? … Or will we be divided and allow the scale of the challenge, the complexity of the questions to overwhelm us?”

The stakes are indeed high. May is under pressure from businesses in Britain and EU officials to come up with a workable plan for Brexit, one that allows trade to continue unhindered and prevents a hard border on the island of Ireland.

Dutch Prime Minister Mark Rutte again called for urgent “clarity” on future ties at a meeting in the Netherlands on Tuesday, where May made the case for “an ambitious economic and security partnership” with the EU, her office said.

Brussels issued May a final warning last week and patience among companies “is reaching breaking point”, according to Adam Marshall, director general of the British Chambers of Commerce (BCC).

May’s finance minister, Philip Hammond, agreed that such a decision was urgent. “We need to make progress,” he told parliament.

FILE PHOTO: A pigeon flies ahead of Britain’s Prime Minister Theresa May as she arrives at a service at St Martin-in-The Fields to mark 25 years since Stephen Lawrence was killed in a racially motivated attack, in London, Britain, April 23, 2018. Victoria Jones/Pool via Reuters

But eurosceptics in her party are determined to keep May to her word that Britain will leave the EU’s single market, customs union and the jurisdiction of its court. They warn against any betrayal of the June 2016 referendum vote to leave the EU.

“At Chequers the prime minister must stick to her righteous cause and deliver what she has said she would do,” Conservative Brexit campaigner Jacob Rees-Mogg wrote in Britain’s best-selling tabloid newspaper, The Sun, on Tuesday.

May’s foreign minister, Boris Johnson, who also campaigned for Brexit, seemed to support the lawmaker by tweeting: “It’s vital that all MPs (members of parliament) are able to air their views on Brexit.” May’s spokesman said he did not disagree.

The British leader has so far managed to balance the competing demands in her talks to unravel more than 40 years of union, but time is running short if the two sides want to reach a deal by October to give it time to be ratified by EU members.

Her spokesman has said the government “is committed to bringing forward a solution” but has declined to comment on whether May will present a “third way” after problems were found with the first two proposals for future customs arrangements.

Former Conservative leader William Hague backed May’s message, calling on ministers to come to an agreement rather than quitting which, he said, “will show they were not fit to hold their office in the first place”.

“The big, sensible middle looks to all of them to think carefully, find agreement, and remember how far they’ve come,” he wrote in the Daily Telegraph newspaper.