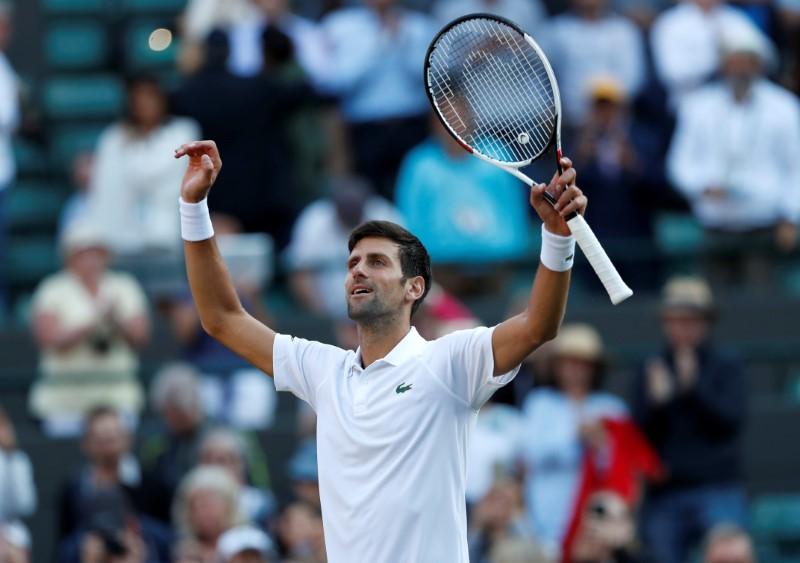 LONDON (Reuters) – Novak Djokovic did his best to finish off his first-round match at Wimbledon in time for Court One fans to head off to watch England’s World Cup clash with Colombia on Tuesday.

The Serbian just failed but a 6-3 6-1 6-2 defeat of American Tennys Sandgren was an impressive way to kick off his challenge for a fourth title at the All England Club.

Djokovic, 31, is seeded 12th here — his lowest Wimbledon seeding — but after a problematic 12 months since pulling out of last year’s tournament with an elbow injury there are signs that the former world number one is coming back to form.

He was clinical against the 57th-ranked Sandgren who was making his Wimbledon debut and who had played only one Tour match on grass prior to arriving in London.

When he moved a double break ahead in the third set the end seemed imminent but Sandgren rescued one break to delay the inevitable before Djokovic finished with a flourish.

He broke again for a 5-2 lead and served out to love for his 59th Wimbledon match win — moving him level with John McEnroe in fifth place on the all-time list.

“It was windy and it was one of those days you want to start well and get that first set under your belt and start to feel more comfortable,” 12-times Grand Slam champion Djokovic said.

“I didn’t want to give him an opportunity to come back to the match. I do feel good, it’s quite refreshing and I’m looking forward to see how I progress in this tournament.”