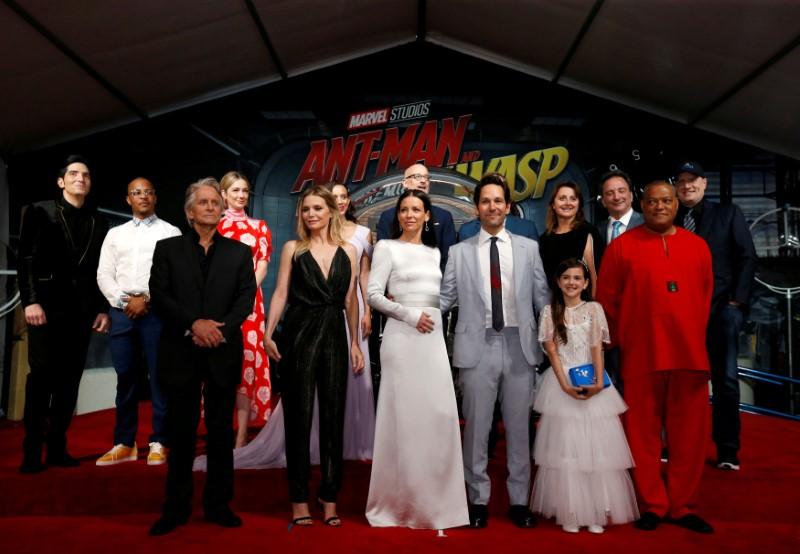 LOS ANGELES (Reuters) – Long before filming began, actress Evangeline Lilly had an idea of the fighting style she wanted to display with her Marvel superhero character, the Wasp.

Lilly, known for her role on science-fiction television series “Lost,” said she worked with stunt women to distinguish the Wasp’s moves from those of Scarlett Johansson’s Black Widow or Marvel’s male superheroes.

“I wanted her to move in a way that honored the comic book, which meant she would move in a very elegant, feminine, graceful way, and still look lethal,” Lilly said in an interview ahead of the release of “Ant-Man and the Wasp,” which starts rolling out in worldwide theaters on Wednesday.

The movie is Marvel’s 20th feature film and the first to spotlight a female character in the title.

“It’s about time, right?” said Paul Rudd, who plays Ant-Man and was also one of the film’s writers. The pair modeled their relationship after on-screen crime-fighting duos with “this charged, kind of playful and mildly annoyed at one another dynamic,” he said, adding: “She’s as bad ass as it gets.”

Lilly also wanted audiences to see her sweat as she and Rudd raced to rescue vitally important stolen technology, according to director Peyton Reed, who worked with the actress even before the script was written to develop the character.

“Evangeline was very specific,” Reed said, “like ‘I don’t want to be glam. I want to sweat after I fight’ … and ‘I want it to feel real like what a woman would feel like in this suit.”

“Ant-Man and the Wasp” is a sequel to 2015 movie “Ant-Man.” In that film, Lilly’s character, Hope van Dyne, does not learn until the movie’s end that her father has built a suit that gives her power to transform to various sizes and fly. The characters often shrink to insect-like proportions to avoid obstacles and detection.

After April’s over-the-top epic “Avengers: Infinity War,” Marvel also downsized the story for “Ant-Man and the Wasp,” focusing on a small group of characters and a quest to reunite with Hope’s mother.

“In some sense, this is an old-fashioned family movie,” said Michael Douglas, who plays Hope’s father, Hank Pym.

The movie does give a clue as to how Ant-Man and the Wasp fit into the events of “Infinity War.”

“Definitely stick around for the end credits,” Reed said.