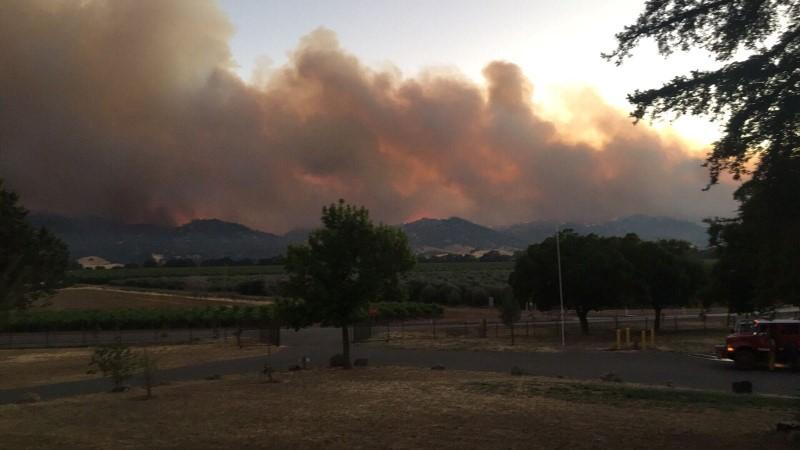 (Reuters) – A wildfire in Northern California swelled on Tuesday, as firefighters battled the blaze that threatened hundreds of homes and other structures, sending thick black smoke across the San Francisco Bay Area.

The County Fire, which broke out on Saturday afternoon in rural Yolo County, west of Sacramento, blackened more than 70,000 acres (28,800 hectares) of grass, brush and dense scrub oak. That was 17 percent more than the 60,000 acres (24,280 hectares) it had burned as of late Monday.

The United States is in the midst of an unusually active fire season, with the risk significantly above normal for many western states, according to federal forecasters.

The County Fire was only 5 percent contained early on Tuesday, with more than 2,100 fire personnel battling the flames, the California Fire authority said.

The blaze threatened about 700 homes, a local NBC affiliate reported, as authorities issued evacuation orders and advisories to hundreds of residents.

The job of hand crews and bulldozer operators trying to cut containment lines was made more difficult by high winds, which were blowing embers and starting new fires, Scott McLean of the California Department of Forestry and Fire protection said.

“The potential for growth remains high as crews battle the fire in difficult terrain,” Cal Fire said in an advisory.

The smoke reached about 75 miles (120 km) south to San Francisco, leaving a film of ash on cars and windows. No casualties have been reported.

In Colorado, firefighters faced another day of hot temperatures, low humidity and gusting winds as they battled eight major blazes which have torched over 140,000 acres in the drought-stricken state.

The largest wildfire, the Spring Fire burning in southern Colorado, grew by 18,000 acres overnight, ballooning to nearly 79,000 acres. It has destroyed at least 104 homes, forced the evacuations of several small communities, and closed a key mountain-pass road. That fire was just 5 percent contained.

Danish national Jesper Joergensen, 52, is suspected of starting the fire and is being held on first-degree arson charges. He is in the country illegally and may face deportation, police said.

Additional reporting by Brendan O’Brien in Milwaukee and Makini Brice in Washington; editing by Scott Malone and James Dalgleish