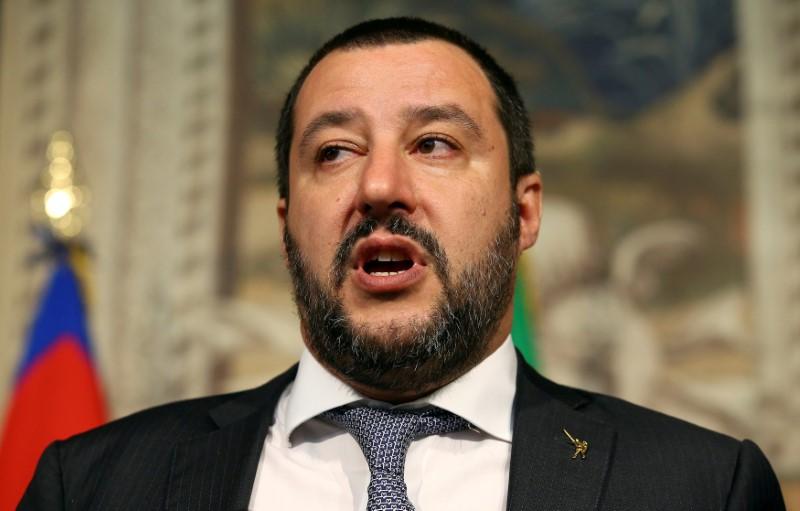 PONTIDA, Italy (Reuters) – “There’s only one captain!” a crowd of more than 10,000 people chant as Italy’s new political order takes shape in a grassy field, their eyes fixed on a politician bridging one of the oldest divides in Italian politics.

As Matteo Salvini steps up to address a rally of his right-wing League Party, founded on the idea that northern Italy should secede from the south, scores of recently recruited supporters from southern regions roar their approval.

The annual rally, which began in 1990 as a cry for independence, morphed on Sunday into a remarkable gathering of north and south, united behind Salvini’s rebranding of the League as a national party with an anti-immigration, eurosceptic agenda.

The scene showed how Salvini’s new-look League and his immigration crackdown in particular are changing Italian politics. Seen by his opponents as a dangerous populist who appeals to nationalism and a fear of foreigners, he has taken the party’s poll ratings into uncharted territory.

The League has soared since he decided as interior minister to close ports to most African asylum-seekers rescued at sea.

“It’s a national League now, no longer northern,” Anselmo Gorga, the party’s youth coordinator from Basilicata, one of Italy’s poorest southern regions, said at the rally outside the village of Pontida, an hour’s drive from Milan.

Around him, people dressed in blue, the League’s new color, mingled with a majority still wearing its traditional green. One man dyed his beard green, though most of the party’s outlandish secessionist-era outfits, such as horned helmets, had vanished.

“We are happy to be in the middle of this, even with people from the north. What Salvini says is the law for us … because it makes good sense for the whole country,” Gorga said.

Stands served traditional southern food such as mozzarella at the rally, held in the same field where previous generations of League supporters had called for the affluent north to split from what they often decried as a corrupt, wasteful south.

Under Salvini’s national rebranding, the League has surged in opinion polls to about 30 percent public support, roughly level with its coalition partner, the 5-Star Movement.

At the March 4 election, the League won 18 percent of the vote and Salvini himself won a senate seat in the southern Calabria region.

“He is the only leader capable of voicing the aspirations of a population that seemed not to have a future,” said Domenico Furgiuele, the League’s secretary for Calabria.

Public Administration Minister Giulia Bongiorno, a League member from Sicily, told the crowd she was made to feel welcome in the party’s northern heartland. “As a Sicilian from Palermo, I felt at home,” she said to loud applause.

A few League stalwarts are not impressed with Salvini’s political embrace of the south. Former League leader Umberto Bossi was conspicuously absent from the rally, officially due to a bad back.

Asked about TV images of southerners at Pontida, he told the Corriere della Sera newspaper: “I only saw a bunch of people interested in being maintained (by the north).”

On the podium at Pontida, Salvini spoke of even grander ambitions for the League, beyond Italy.

“The goal is to change Europe and give voice to those populations that are cut down by those who only ever cared about financial outcomes and the multinationals and who have offered us a future of precariousness and fear,” he said.