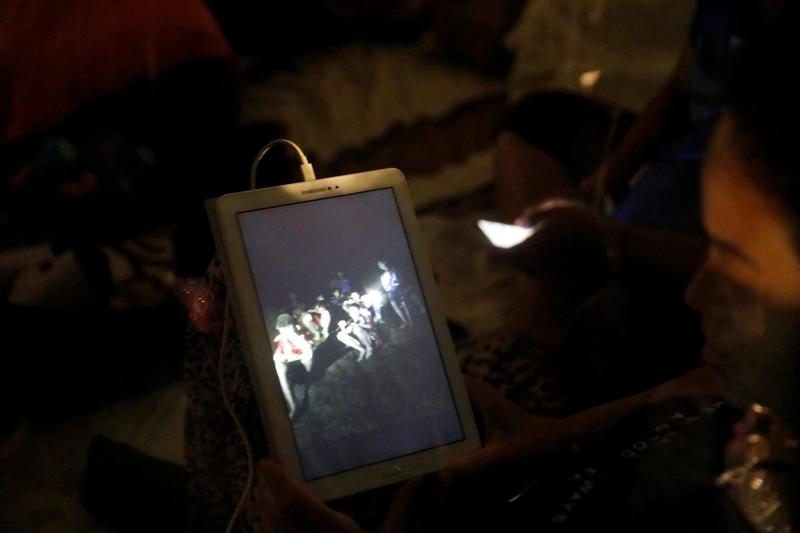 In video shot by rescuers as the boys were found, flickering torchlight revealed boys clad in shorts and red and blue shirts sitting or standing on the ground in an underground cave beside an expanse of water.

“How many of you are there – 13? Brilliant,” a member of the multinational rescue team, speaking in English, tells the boys. “You have been here 10 days. You are very strong.”

“Thank you so much,” one of the boys says.

The boys, aged between 11 and 16, went missing with the 25-year-old after soccer practice on June 23 after they set out to explore the Tham Luang cave complex in a forest park near by the border with Myanmar.

A massive international rescue effort has been under way since, with rescue teams battling through thick mud and high water to try to reach the group in the cave network that stretches 10 km (6 miles) into a mountain.

“Thai Navy seals have found all 13 with signs of life,” Governor Narongsak Osottanakorn told reporters who have been following the increasingly desperate search that has gripped the country.

Relatives of the boys, who have been at a shelter near the cave hoping for a breakthrough, were seen cheering, smiling and receiving calls after being given the news. Rescuers shook hands and congratulated each other as occasional cheers broke out.

It remains unclear whether any of the group are injured or in need of medical attention, but they have been given energy gels to sustain them while a plan is worked out to bring them to safety.

As the days wore on with the group missing, distraught family members had placed fruit, desserts, sugary drinks and sweets on mats near the cave as an offering to the spirits which some people believe protect the cave and the forest.

A family member looks at a photo near Tham Luang cave complex, as members of under-16 soccer team and their coach have been found alive according to a local media’s report in the northern province of Chiang Rai, Thailand, July 2, 2018. REUTERS/Soe Zeya Tun

Rescuers had been working on Monday to clear a constricted passageway for divers deep inside the flooded complex in a search operation that has been hampered by heavy rain.

Divers from Thailand’s elite navy SEAL unit had been focusing on an elevated mound inside the cave which cavers have named “Pattaya Beach”, which could have provided the boys with a refuge when rains flooded the cave.

“The SEALs reported that … they reached Pattaya Beach which was flooded. So they went 400 meters further where we found the 13 … who were safe,” Narongsak told the cheering group of reporters.

Captain Jessica Tait from the U.S. Air Force’s rescue support team said there were “lots of challenges” throughout the search but that the effort had brought the country together.

“But you know what I saw, I saw Thailand coming together,” she added.

The next challenge will be getting the group out of the cave, which some have dubbed a “labyrinth”.

Rescuers had discussed waiting until water levels subsided to get the boys out. Other options included teaching the group to use diving gear to navigate the flooded cave.

Medical teams were seen preparing first aid kits after news of the group’s discovery broke outside the cave’s entrance.

Narongsak said medical teams had been sent inside the cave and it would take them around four hours to assess the group’s health and how fit they are before coming up with a strategy to get them out.

The boys have been provided with energy gel to eat, the Thai navy SEAL unit said on its official Facebook page.

“Power gel and sustenance equipment has been brought … to the team … and we’ve sent people to keep them company until the transport plan can begin,” it said.