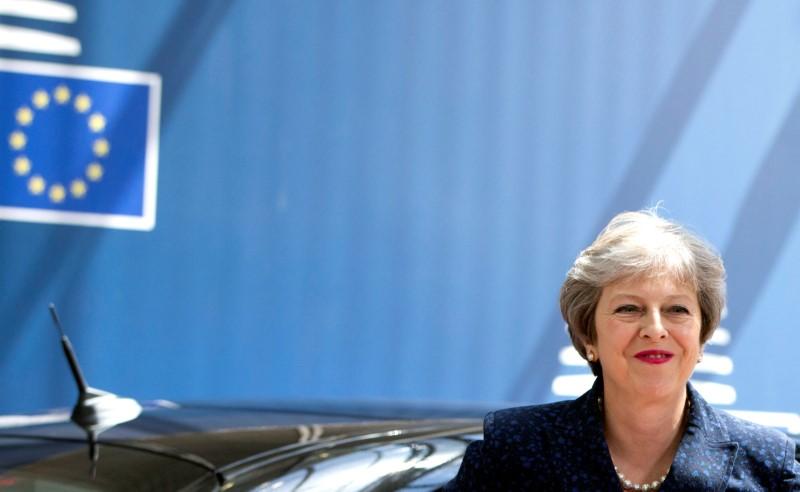 LONDON (Reuters) – Prime Minister Theresa May will present to her team a new proposal for trade with the European Union that in effect comprises the “softest possible Brexit”, ITV’s political editor reported on Tuesday, citing sources.

Britain’s exit from the bloc next year will mark its biggest trading and foreign policy shift in almost 50 years. But May has struggled to unite pro- and anti-Brexit camps in her cabinet and party around a plan for future trade with the EU.

So far, May’s advisers have come up with two options, neither of which have the full support of her party. Both have already been dismissed in principle by EU officials.

With the clock ticking towards a March departure date and passions running high, May is holding a meeting of senior ministers on Friday at which she will pitch a compromise third option, ITV political editor Robert Peston said.

She will ask her cabinet to back a plan that would see Britain collect duties on imports at the rate of the EU’s common customs tariff, in effect making Britain the EU’s tax collector, according to Peston.

May and her officials believe this would avoid the need for border checks between the Republic of Ireland and Northern Ireland, Peston wrote in a Facebook post.

A government official said he would not comment on speculation before the meeting.

Opposition lawmaker Hilary Benn, who chairs parliament’s Brexit committee, said he thought it was “unlikely that the EU will agree to outsource the collection of its own tax revenues to a third country”.

Peston also said May’s proposal would include IT and camera technology to help reduce bureaucracy around the border, as well as British alignment with EU standards for goods and agricultural products.

On services, which make up the bulk of Britain’s economy, Peston said May wants to offer the EU preferential rights for its citizens who want to live and work in Britain, in exchange for better access to the EU’s services market.

The EU has rejected previous British proposals for trade with the bloc after Brexit, saying Britain cannot both quit the EU and retain the main economic benefits of membership.

Last week the EU issued May a final Brexit warning – put your cards on the table, offer ways to overcome “huge” differences and prevent Britain from crashing out of the bloc without a deal. [nL8N1TV2RZ]