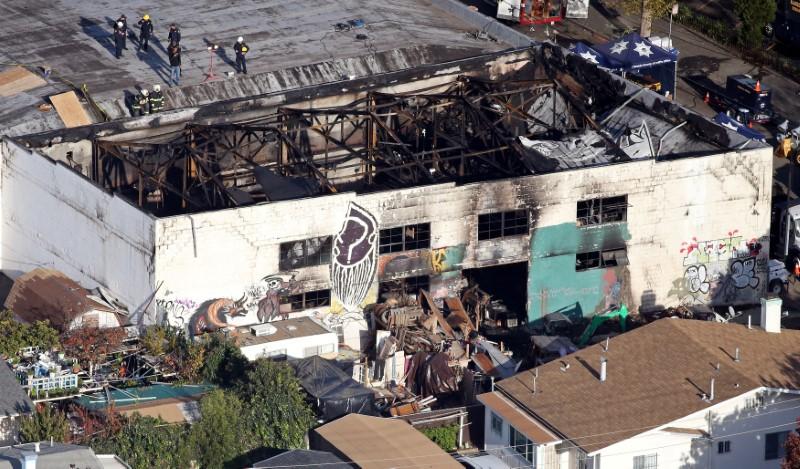 (Reuters) – Two men are due to plead no contest on Tuesday to involuntary manslaughter charges related to a fire that killed 36 people in a warehouse they ran as an art and party space in Oakland, California, the East Bay Times newspaper reported.

Derick Almena, 48, and Max Harris, 28, negotiated a plea deal with Alameda County prosecutors that would see them respectively sentenced to nine and six years in prison, the newspaper reported, citing a letter prosecutors sent to victims’ relatives.

The fire destroyed the 10,000-square-foot (900-square-meter) Ghost Ship warehouse during an illegal dance party on Dec. 2, 2016. It was the deadliest fire in the United States since 100 people were killed in 2003 in a fire at a Rhode Island nightclub.

Most of the 36 people killed died from smoke inhalation, the coroner ruled. Fire officials were unable to determine what started the fire.

Almena rented the warehouse and ran it as an art collective and communal residence without proper permits, a common arrangement in Bohemian corners of expensive U.S. cities. Harris was the creative director of the art space.

The two men were accused of criminal negligence, with prosecutors pointing to the building’s lack of sprinklers and smoke detectors. A staircase between its two floors was built partially out of flammable wooden pallets. On the night of the party, the men blocked one of the two exterior doors.

Almena and Harris, who both lived in the warehouse, had earlier pleaded not guilty to 36 counts each of involuntary manslaughter, and faced up to 39 years in prison if convicted.

Some victims’ relatives said the shorter sentences agreed to in the plea deal were too lenient, the newspaper reported.

David Lim, a deputy district attorney for Alameda County, told families in his letter that if the case went to a jury trial it could last between four and six months, the Times reported. A plea deal “spares the families from having to re-live the tragedy of Dec. 2,” Lim wrote.

Lim’s office and the defendants’ attorneys were unavailable for comment early Tuesday.