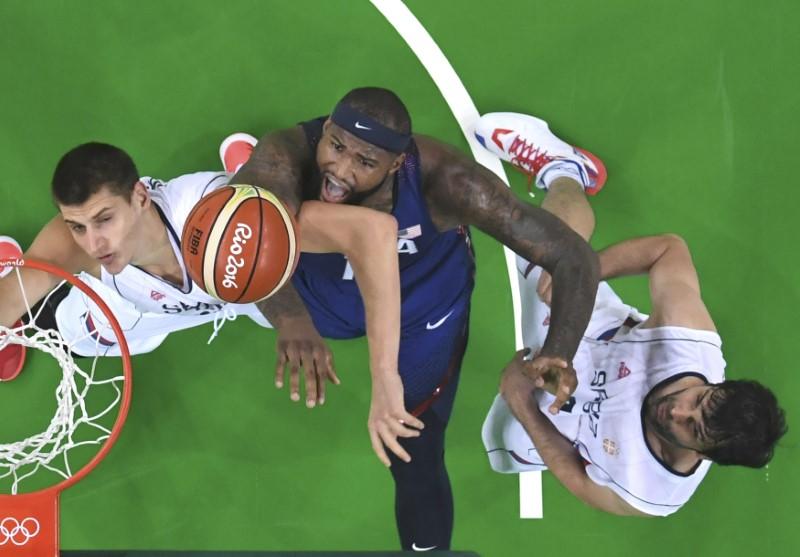 Free agent center DeMarcus Cousins has agreed to a one-year, $5.3 million contract with the Golden State Warriors, according to multiple reports on Monday. Cousins’ salary represents the taxpayer mid-level exception.

According to an ESPN report, Cousins narrowed his choices to the Warriors and Boston Celtics before picking Golden State.

Cousins, who turns 28 in August, is recovering from a torn left Achilles tendon sustained in January. Prior to the injury, the Pelicans were expected to offer him a max-level, five-year contract this offseason, but the severity of the issue was expected to depress his market significantly. Now he will have the opportunity to repair his value on a one-year contract before hitting the market again next offseason.

Before his injury, Cousins was averaging 25.2 points, 12.9 rebounds, 5.4 assists, 1.6 steals and 1.6 blocks per game through 48 games with the Pelicans, figures that have never been reached by one player in a single season in NBA history. It was his first full season in New Orleans after the Pelicans acquired him in February of 2017 for a package including Buddy Hield, Tyreke Evans and a first-round pick.

—The Los Angeles Lakers continued the remolding of their club by agreeing to a one-year, $9 million deal with veteran point guard Rajon Rondo, according to multiple reports.

Adding the 32-year-old Rondo makes for a unique situation, as Los Angeles selected point guard Lonzo Ball with the No. 2 overall choice in the 2017 draft. Ball is currently rehabbing a torn meniscus in his left knee and is expected to be ready for training camp, while Rondo is approaching the situation as if the starting position is up for grabs, according to multiple reports.

—Shortly after becoming an unrestricted free agent, Julius Randle found a new employer by agreeing to a two-year, $18 million deal with the New Orleans Pelicans, according to multiple reports.

The Los Angeles Lakers renounced their $5.56 million qualifying offer to Randle earlier in the day to clear space to sign ex-Pelicans point guard Rajon Rondo, paving the way for the 23-year-old Randle to quickly find a new team.

—Phoenix Suns owner Robert Sarver and general manager Ryan McDonough are meeting with guard Devin Booker and his agent on Tuesday in Los Angeles to discuss a contract extension, according to multiple reports.

Booker, 21, is eligible for a five-year extension worth up to $158 million as he enters the final year of his four-year rookie contract. The 13th overall pick in 2015, he made $3.3 million last season.

Booker averaged 24.9 points, 4.7 assists and 4.5 rebounds last season, setting career highs by a comfortable margin in each category. Through three seasons, he has averaged 19.8 points, 3.5 assists and 3.3 rebounds in 32.2 minutes per game.

—As LeBron James leaves the city of Cleveland for a second time, so too will the iconic banner bearing his likeness.

A day after James’ representatives confirmed he had agreed to a four-year, $154 million contract with the Los Angeles Lakers, it was announced that the massive James banner that hangs downtown will come down.

The 10-story billboard covers part of the side of the Sherwin-Williams global headquarters and shows James, in his No. 23 Cavs’ jersey, with his arms outstretched. A spokesman for the paint company said Nike will remove the banner this week, and Sherwin-Williams does not yet have a plan to replace it.

Ainge said the latest procedure was to remove a plate and screws from Hayward’s left ankle.

Hayward broke the ankle in the first quarter of the season opener against the Cleveland Cavaliers. His recovery was progressing until he felt soreness in the ankle. The complications led to the second surgery in late May.

—The Philadelphia 76ers have re-signed free-agent guard JJ Redick to a one-year deal in the neighborhood of $12 million to $13 million, according to ESPN.

In his first season in Philadelphia, Redick averaged career highs in points (17.1) and rebounds (2.5). He also made 42 percent of his 3-point shots and more than 90 percent of his free throws, starting in all 70 regular-season games in which he played.

—The Oklahoma City Thunder will sign free-agent center Nerlens Noel to a two-year contract with a player option in the second year, according to a Yahoo Sports report.

In five seasons, Noel has averaged 9.3 points, 7.2 rebounds and 1.4 blocks in 223 games (158 starts). He played in just 30 games (six starts) last season, averaging 4.4 points and 5.6 rebounds, missing significant time because of a torn ligament in his left thumb that required surgery in early December.

—The Utah Jazz have agreed to re-sign forward Derrick Favors on a two-year deal worth $36 million, according to multiple reports.

—The Minnesota Timberwolves and forward Anthony Tolliver have agreed on a one-year deal, multiple outlets reported.

Tolliver’s salary will be $6 million, according to multiple reports. The 33-year-old averaged 8.9 points and 3.1 rebounds in 79 games (14 starts) for the Detroit Pistons last season.

With the Cavaliers last season, Calderon played in 57 games (32 starts) and averaged 4.5 points and 2.1 assists in 16.0 minutes per game.

Evans, 21, was the 28th overall selection in the recent NBA draft. The 6-foot-6 guard played college basketball for Cincinnati.

—Seth Curry and the Portland Trail Blazers have agreed to a two-year, $5.6 million contract, according to multiple reports.

Curry, 27, averaged 12.8 points for the Dallas Mavericks in 2016-17 before missing all of last season with a fractured left tibia. He is the younger brother of Golden State Warriors star Stephen Curry.

—Mike Scott agreed to a one-year deal with the Los Angeles Clippers, according to multiple reports.

Scott, 29, averaged 8.8 points in 76 games (one start) with the Washington Wizards last season. He spent the first five years of his NBA career as a reserve for the Atlanta Hawks.