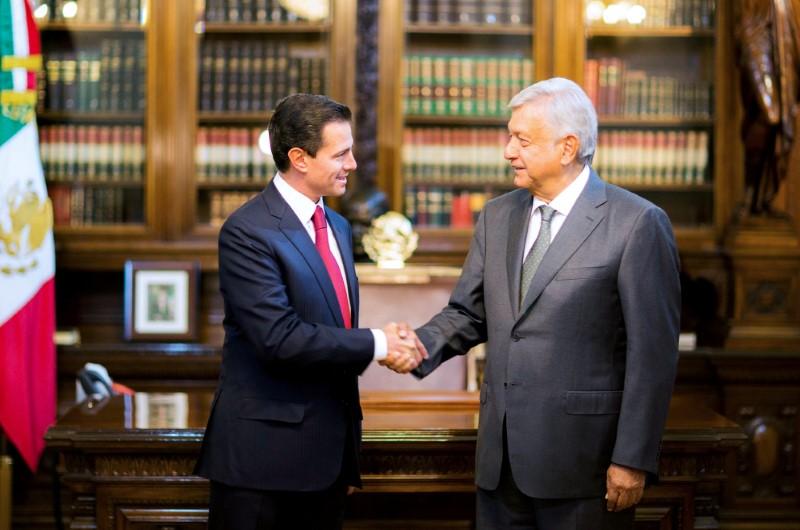 Lopez Obrador, the former mayor of Mexico City, won 53 percent of the vote on Sunday, the largest margin for a presidential election since the early 1980s, giving him a strong mandate to make deep changes to policy at home and abroad.

“There’s going to be a real change, a deep change,” Lopez Obrador said after his meeting with Pena Nieto. “It will be a radical change, but nobody should be scared.”

Fond of acid putdowns of rivals and with views that lean toward nationalism and populism, the man best known as AMLO has drawn comparisons with U.S President Donald Trump.

How well the two men get on will determine whether fraught U.S.-Mexico relations improve from current tensions over migration, the North American Free Trade Agreement and Trump’s demand that Mexico pay for a border wall.

Lopez Obrador spoke with Trump on Monday in what he described as a friendly and respectful phone call. An aide said the call provided a reset in relations between the two countries.

On the call, Lopez Obrador offered to help lower immigration to the United States in return for help on economic development in Mexico. The conversations with Pompeo will touch on those subjects, as well as security and trade, Mexico’s Foreign Ministry said in a statement.

During his meeting with Pena Nieto, the first since Sunday’s election, Lopez Obrador said they had agreed to work jointly on talks with the United States and Canada to reconstruct NAFTA, maintaining the current negotiating team while also including Lopez Obrador’s picks for handling future talks.

A longtime energy nationalist who says he will pause tenders for oil and gas fields that form a crucial part of Pena Nieto’s energy reform, Lopez Obrador said his team will begin working on how to proceed with the oil, gas and power overhaul once he is officially confirmed as president-elect.

Mexico’s election tribunal says it will ratify the election results by no later than Sept. 6.

Lopez Obrador also said he would form joint teams with Pena Nieto’s administration to analyze the $13 billion Mexico City airport project, which he has repeatedly threatened to scrap, and see what is the best course of action.

His vague policy promises make it hard to judge how far he will take Mexico to the left, although during the campaign and since Sunday’s win, he and his team have repeatedly told international investors that Mexico is open for business.

On Tuesday, he reiterated commitments to respect central bank independence, maintain microeconomic stability and fiscal discipline. He said his transition team will work with the current Finance Ministry to craft the 2019 budget, which is set to include measures to increase some pensions.

He said he will meet with business leaders on Wednesday.

The peso has been volatile since Sunday’s result, but was up 2.5 percent against the dollar on Tuesday, leading gains among emerging market currencies. The Mexican S&P/IPC BMV stock index was also up.

“We are actually quite optimistic about the outcome of the election,” said Paul Greer, a portfolio manager at Fidelity International. “We are overweight local currency government bonds and the Mexican peso.”

AMLO’s plans also include holding public consultations on the future of economic policies including the energy reform, unnerving some investors.

In a TV interview late on Monday, he said he would hold a recall referendum after three years to ask the public whether it still had faith in his presidency.

“Just as they elected me, they’ll have the chance to remove me, but I’m sure I’ll win as there will be results,” he said, reiterating a campaign promise.

Lopez Obrador said he would not make any attempt to run for a second presidential term, which would require a constitutional change.