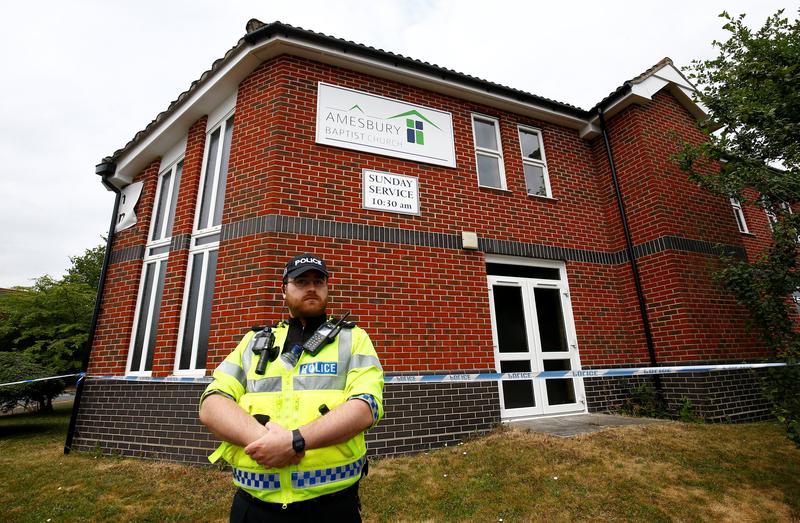 AMESBURY, England (Reuters) – British counter-terrorism officers joined a police investigation on Wednesday after two people were found in a critical condition from suspected exposure to an unknown substance near the English city where a former Russian spy was poisoned.

Britain’s Sun newspaper reported that the man and woman had been poisoned and were showing similar symptoms to those displayed by ex-double agent Sergei Skripal and his daughter Yulia, who were victims of a nerve agent attack in March.

Samples of the substance involved have been sent to the nearby military research centre of Porton Down for testing, a source close to the investigation said.

“At this stage it is not yet clear if a crime has been committed,” said Deputy Chief Constable Paul Mills of Wiltshire Police who took the rare step of calling it a major incident.

“We are keeping an open mind as to the circumstances regarding this incident,” he told reporters.

The British pair, a 44-year-old woman and a 45-year-old man, were hospitalised after being found unwell on Saturday in Amesbury, seven miles (11 km) north of Salisbury, where the Skripals were found slumped unconscious on a bench on March 4.

“They remain in a critical condition,” Mills said, adding that at least five different areas had been cordoned off, including a park and a property in Salisbury, and a pharmacy and a Baptist church community centre in Amesbury.

Britain blamed the poisoning of the Skripals on Russia, prompting a serious diplomatic crisis between Moscow and Western states. Russia denied any involvement.

A Wiltshire police spokeswoman declined to confirm whether the couple were believed to have been poisoned. But London police confirmed that specialist counter-terrorism officers were helping the inquiry.

TESTS ON NATURE OF SUBSTANCE

Mills said paramedics were called on Saturday morning to a house in Amesbury after the woman collapsed and returned later in the day when the man also fell ill.

The pair, who are being treated at Salisbury District Hospital, were initially believed to have taken heroin or crack cocaine from a contaminated batch but tests are ongoing to identify the substance involved.

A police officer stands in front of Amesbury Baptist Church, which has been cordoned off after two people were hospitalised and police declared a ‘major incident’, in Amesbury, Wiltshire, Britain, July 4, 2018. REUTERS/Henry Nicholls

“We are working with the police to understand the circumstances surrounding this incident and it would be inappropriate to make further comment at this time, while we establish how they became unwell,” said Cara Charles-Barks, the hospital’s chief executive.

The hospital is where the Skripals also spent weeks in a critical condition before slowly recovering and being discharged.

Britain accused Russia of poisoning Skripal with Novichok nerve agent, the first known offensive use of such a chemical weapon on European soil since World War Two.

Moscow denied any involvement and suggested Britain had carried out the attack to stoke anti-Russian hysteria.

Russia has said it does not possess such nerve agents, did not develop Novichok, and President Vladimir Putin dismissed as nonsense the notion that Moscow would have poisoned Skripal and his 33-year-old daughter.

The attack prompted the biggest Western expulsion of Russian diplomats since the Cold War as allies in Europe and the United States sided with May’s view that Moscow was either responsible or had lost control of the nerve agent.

Moscow has hit back by expelling Western diplomats, questioning how Britain knows that Russia was responsible and offering its rival interpretations, including that it amounted to a plot by British secret services.

Reporting by Andy Bruce and Kate Holton in London; Writing by Guy Faulconbridge and Michael Holden; Editing by Mark Heinrich and Gareth Jones