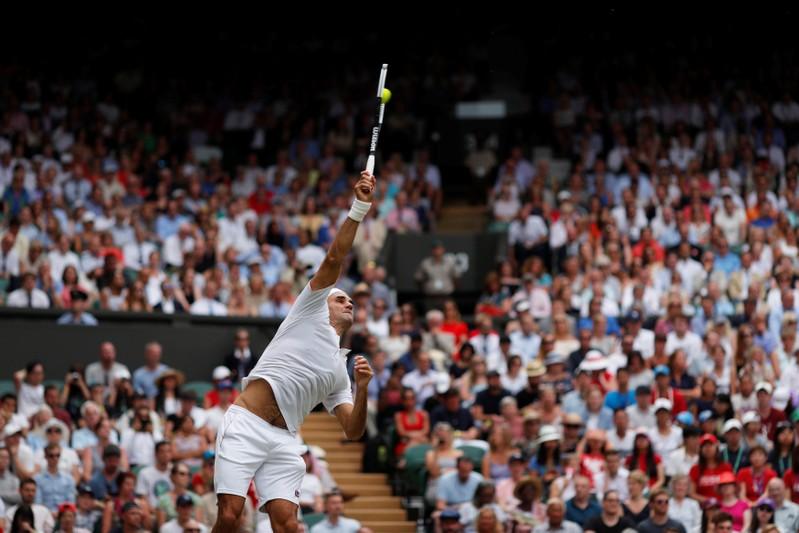 LONDON (Reuters) – When Roger Federer’s lunging mis-hit spun high into the air and turned into a glorious lob, Lukas Lacko must have known it was going to be one of those days when he might as well enjoy having the best view in the house.

It was just too bad the Slovakian could not put his feet up and enjoy the jaw-dropping spectacle.

Two days after creating a stir at Wimbledon with his new mega-bucks clothing deal, Federer was back making a style statement with his dazzling tennis as he gave Lacko a 6-4 6-4 6-1 dressing down to reach the third round on Wednesday.

The Swiss champion was at his breath-taking best as he crafted 48 exquisite winners during a 90-minute masterclass that seemed more an exhibition of his shot-making than a charge towards a record ninth Wimbledon title.

The last time Federer turned up to defend his crown, in 2013, he suffered a shock second-round humbling by Sergiy Stakhovsky.

There was no danger of a repeat performance on Wednesday, however, and a forehand swish on match point gave the top seed a 26th consecutive set at the grasscourt major.

“On certain days it goes better than others,” summed up a grinning Federer, who will be seeking a 10th successive win at the All England Club when he takes on Germany’s Jan-Lennard Struff in the third round.

Lacko had probably hoped he could throw some curve balls Federer’s way after enjoying a run to the Eastbourne final at the weekend.

Unfortunately, it was the Slovakian who was left dodging the majestic missiles that kept raining down on his half of the court.

The top seed belted down 16 aces, hit the target with 70 percent of his first serves, dropped only three points on his first serve and did not even come close to facing a break point.

Federer fired three of those aces in a row to take the second set and he got his 15,000-strong Centre Court fan club gasping in astonishment as he produced a ridiculous backhand drop shot from behind the baseline.

The 36-year-old also collected 35 consecutive points on serve on his way to a 5-1 lead in the third set.

With Federer having an elegant answer to everything Lacko could throw at him, it was not until the 20-times Grand Slam champion walked off court that he was finally stumped.

When asked if he would prefer the umpire to announce ‘game Mr. Federer’ – just as the women are addressed as a “Miss” or “Mrs” here – rather than just “game Federer”, the man contesting his 20th consecutive Wimbledon admitted he was clueless about that particular tradition.

“Oh, I didn’t know that,” he said sounding bemused.

Within seconds he added with a smile: “I’m happy whatever they say, as long as it is ‘game’ and my name and not ‘game’ and the other (person’s) name.”