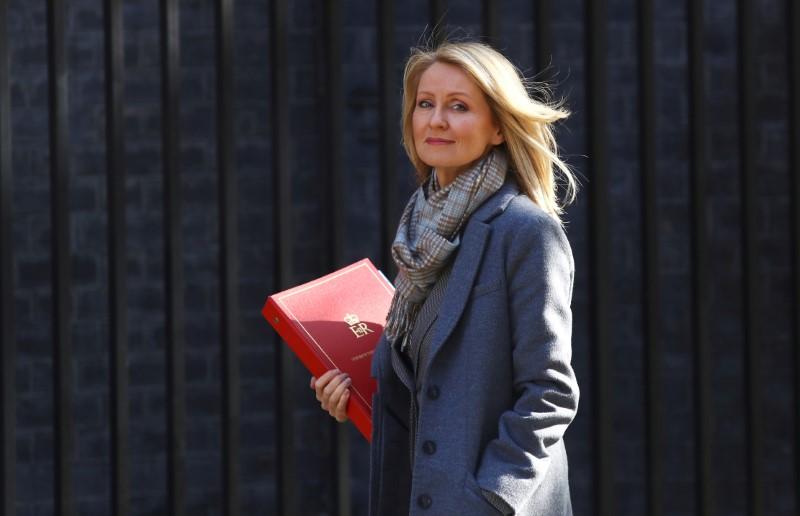 LONDON (Reuters) – Britain’s welfare minister Esther McVey apologised on Wednesday for making misleading remarks to parliament about a controversial reform but did not publicly offer her resignation.

Britain’s Secretary of State for Work and Pensions Esther McVey arrives in Downing Street in London, May 1, 2018. REUTERS/Simon Dawson/File Photo

McVey made the apology after spending watchdog the National Audit Office (NAO) took the unusual step of publicly criticising her, saying she misinterpreted a report to make it look as though a much-criticised welfare reform is working well.

Being shown to have deliberately misled parliament is a resigning offence under the ministerial code of conduct.

Last month, the NAO warned the rollout of “Universal Credit” – aimed at simplifying welfare payments to claimants – may cost more than the system it is replacing.

McVey conceded that she was mistaken in claiming the watchdog had asked for the rollout of the programme to be speeded up, and apologised for misleading lawmakers.

“While speaking in parliament in answer to questions on the NAO report into universal credit, I mistakenly said that the NAO had asked for the rollout of universal credit to continue at a faster rate and to be speeded up,” she said.

“I want to apologise to … the House for inadvertently misleading you.”

Universal credit aims to simplify payments to claimants by consolidating six different types of state benefits into one.

But a series of management failures, expensive IT blunders and design faults mean the project has cost many times more than originally predicted and it has fallen at least five years behind schedule.

The government is pressing ahead with it, despite concerns voiced by some lawmakers that some claimants have to wait too long to receive payments and criticism that it risks harming vulnerable citizens.