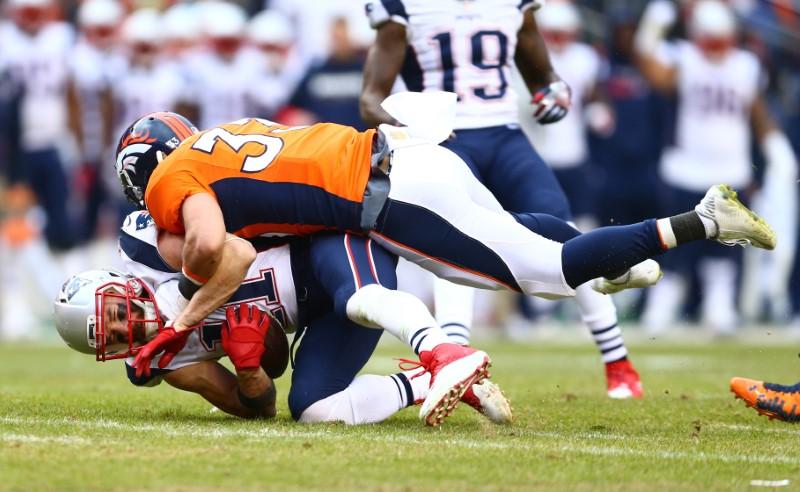 Edelman’s appeal — contesting his violation of the league’s performance-enhancing drugs policy — was heard June 25 and reportedly focused on two points: the identity of the substance for which he is being suspended, and alleged mishandling of his drug sample during the testing process. Various reports have said that Edelman’s positive test was for a substance that was not immediately recognizable.

Entering his 10th season, Edelman missed all of last season after tearing the anterior cruciate ligament in his right knee during a preseason contest. In nine NFL seasons, including last year’s campaign that was wiped out by injury, Edelman has 425 receptions for 4,540 yards and 24 touchdowns. He made 98 grabs for 1,106 yards and three scores in 2016.

—Green Bay Packers running back Aaron Jones was suspended for the first two games of the 2018 season without pay for violating the league’s substance-abuse policy, the NFL announced.

The suspension is presumably tied to Jones’ October arrest for marijuana possession during a traffic stop. He later pleaded no contest and was required to pay $1,047 in court costs while having his driver’s license suspended for six months.

Jones will be eligible to return to the active roster on Sept. 17, one day after a game against the Minnesota Vikings. Jones, 23, rushed for 448 yards and four touchdowns as a rookie last season. He sported an impressive 5.5 average per carry and recorded six runs of 20 or more yards.

—Los Angeles Rams right guard Jamon Brown has been suspended without pay for the first two games of the 2018 season after violating the NFL’s substance-abuse policy, the team announced.

Brown, who is entering his fourth season NFL season, started all 16 games for the Rams last season, allowing 2.5 sacks and committing five penalties.

He will be eligible to return to the active roster on Sept. 17, one day after a game against the Arizona Cardinals.

On the most recent episode of “Very Cavallari” — a reality show featuring Cutler’s wife, Kristin Cavallari — Cutler was asked by his wife if he thinks he’s “100 percent done with football.” “Well I mean I can’t say, 100,” he replied. “Probably.” Asked when he’ll know for sure, Cutler said “September,” referring to the start of the NFL season.

Cutler, playing in place of injured Ryan Tannehill, started 14 games for Miami last season, throwing for 2,666 yards (career-low 6.2 yards per attempt), 19 touchdowns and 14 interceptions while going 6-8 as a starter. The 12-year veteran has started 153 career games for the Denver Broncos, Bears and Dolphins, going 74-79 while throwing for 35,133 yards, 227 touchdowns and 160 interceptions.

According to the 49ers’ official website, the punishments stem from a misdemeanor weapons charge — to which Foster pleaded no contest in June — and a misdemeanor drug offense, after Foster was arrested in January on a misdemeanor marijuana charge that was later dropped.

That would indicate that Foster, who will forfeit $103,024 in salary for the two missed games, on top of the undisclosed fine, was not punished further for the pair of felony domestic violence charges he faced, stemming from a February incident. Those charges were dismissed in May after Foster’s ex-girlfriend, Elissa Ennis, testified that she initially lied to police about Foster hitting her and did so in an attempt to ruin Foster’s career and “end him.”

—Terrell Owens announced in a statement that he’ll hold his own Hall of Fame induction celebration at the place where he played his college ball, the University of Tennessee at Chattanooga. Owens had previously said he would skip the official festivities in Canton, Ohio, when he is inducted into the Pro Football Hall of Fame on Aug. 4. His celebration will be that day also.

Owens was selected for induction on his third year on the ballot. He expressed dissatisfaction when passed over in his first two years of eligibility. This year’s other inductees are general manager Bobby Beathard and players Robert Brazile, Brian Dawkins, Jerry Kramer, Ray Lewis, Randy Moss and Brian Urlacher.

Owens ranks second in NFL history with 15,934 yards, third with 153 touchdown catches and eighth with 1,078 yards. He was a six-time Pro Bowl selection. Owens, an outspoken figure throughout this career, topped 1,000 yards nine times and caught a career-best 100 passes for the 49ers in 2002.

—Federal authorities revealed that they intercepted a shipment of 108 phony replica Super Bowl rings from many teams, including the recently crowned Philadelphia Eagles.

Philadelphia Customs and Border Protection officials found the rings in an express consignment parcel that arrived June 18 from Hong Kong. Officials said the parcel was marked as “alloy rings.”

Trade enforcement officers detected poor craftsmanship and decided to detain the rings and took steps to see if the rings were authentic. But the NFL, the trademark holder, informed customs officials that the rings were phony. Officials said an authorized replica of a Super Bowl ring can cost approximately $10,000, but counterfeit ones sell for about $25 on the Internet.