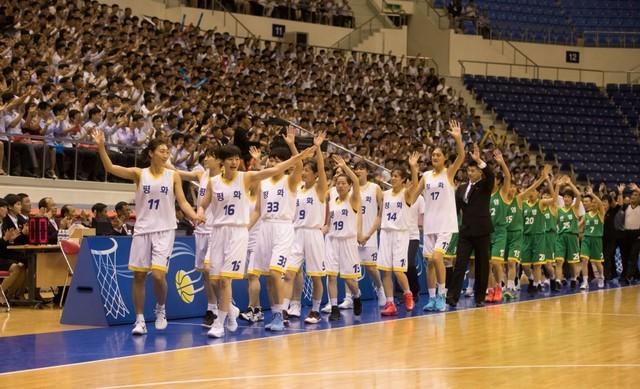 SEOUL (Reuters) – North and South Korea joined forces for their first basketball friendly in 15 years on Wednesday amid a warming of relations since the Winter Olympics in the South and easing tensions over the North’s nuclear and missile programs.

Prosperity and Peace teams formed with a mixture of North and South Korean women players arrive at a gym in Pyongyang, North Korea, July 4, 2018. Korea Pool/Yonhap via REUTERS

Women athletes from the traditional foes put political differences aside to form two joint North-South teams, “Peace” and “Prosperity”, in the friendly in the North Korean capital of Pyongyang, the packed crowd shouting and waving balloons in what turned out to be a thriller – Prosperity won 103 to 102.

Two men’s teams were playing later in the day.

“I am proud that sport has stood at the forefront of opening this great path to reconciliation, peace and prosperity between North and South Korea,” North Korean Vice-Minister of Sports Won Kil U told the South Koreans on arrival on Tuesday.

Prosperity team formed with a mixture of North and South Korean women players arrive at a gym in Pyongyang, North Korea, July 4, 2018. Korea Pool/Yonhap via REUTERS

The South Koreans will return on Friday after two more games on Thursday, this time with teams divided by country – but no flags being shown.

North Korean leader and basketball fan Kim Jong Un was not spotted in the crowd on Wednesday but the chairman of the North’s National Sports Guidance Committee, Choe Hwi, who also visited South Korea for the Winter Olympics, was sitting next to the South’s Unification Minister, Cho Myong-gyon, clapping hands.

Kim had suggested the friendlies to South Korean President Moon Jae-in in April when the two held their first summit at the border village of Panmunjom straddling the two Koreas.

It was the fourth time the two sides, technically still at war since their 1950-53 conflict ended in a truce, not a treaty, have played together, the last match taking place in 2003.

Kim has in the past invited former U.S. NBA players to Pyongyang to play with North Korean players. He also struck up a friendship with former U.S. basketball star Dennis Rodman.

Rodman, a basketball Hall of Famer and five-time NBA champ, has traveled to North Korea multiple times, prompting ridicule and criticism from some U.S. politicians and activists that his visits served as fodder for North Korean propaganda.

Relations between the two Koreas have been warming since North Korea sent athletes and a high-ranking delegation to the Winter Olympics in Pyeongchang in February following a year of tension and bellicose rhetoric from both sides over North Korea’s weapons programs.

Last month, Kim held a summit with U.S. President Donald Trump, a meeting that would have been unthinkable just weeks earlier.

Trump said on Tuesday that talks with North Korea were “going well” as U.S. officials seek to reach an agreement with Pyongyang over a denuclearization plan.

This will not be the two Koreas’ last opportunity to play sport together. They have agreed to march together under a unified peninsula flag at the Aug. 18 Asian Games ceremony in Indonesia and field combined teams in some events.