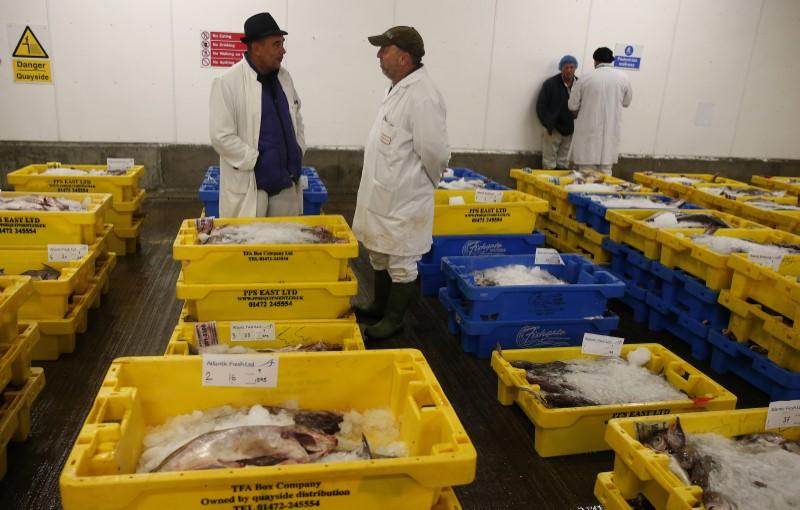 EDINBURGH (Reuters) – Britain wants to decide how much access to its fishing grounds it gives after it leaves the European Union, according to a policy document on Wednesday.

Fish buyers talk as they wait for the daily auction to start at the fish market in Grimsby, Britain November 17, 2015. REUTERS/Phil Noble/File Photo

“As an independent coastal state for the first time in over 40 years, access to UK waters will be on our terms, under our control and for the benefit of UK fishermen,” food and environment minister Michael Gove said.

“This is consistent with the approach to fisheries taken by other coastal states including Norway,” he added.

The government wants to separate the issue of access to its waters from that of how much British fish is exported to the EU in its Brexit discussions with Brussels.

The idea of dividing the two matters, so that fish becomes part of an overall food and drink negotiation, is the foundation upon which the minority Conservative government has the support of the British fishing community.

That includes key parliamentary seats based in the North East of Scotland, where many voters backed Brexit because they say the current EU fishing quota system has gradually decimated their industry over decades.

The “white paper” policy document, which argues that the current EU fishing system is unfair and outdated, now has a 10 week consultation period.

Britain’s proposals may run into opposition in Brussels, however, because the EU has argued that if UK fish products are to be sold in the rest of Europe, EU vessels must be allowed to fish in British waters.

While Britain is part of the EU trading bloc, Europe imports about 75 percent of Britain’s fishing catch. Britain wants to allow foreign ships to fish in its waters after Brexit but wants to decide itself the extent of that access.

The EU’s current policy allows all European boats access to EU waters and fishing grounds, which it says allows fishermen to compete fairly. Up to now the EU has rejected the idea that Britain can unilaterally dictate the terms on which other countries can fish in its waters.

Prime Minister Theresa May has said Britain will leave the EU Common Fisheries Policy (CFP) but under a so-called transition agreement, quotas will remain in place during the two years after the UK leaves the bloc next March.

The Scottish Fisheries Federation says 60 percent of what would be Scottish fish is caught by other EU fishing nations, and has long argued that decades of EU membership has weakened the industry severely.

Fishermen have also expressed fears that access to fishing grounds could be used a bargaining chip for other trading advantages for Britain as it leaves the EU.