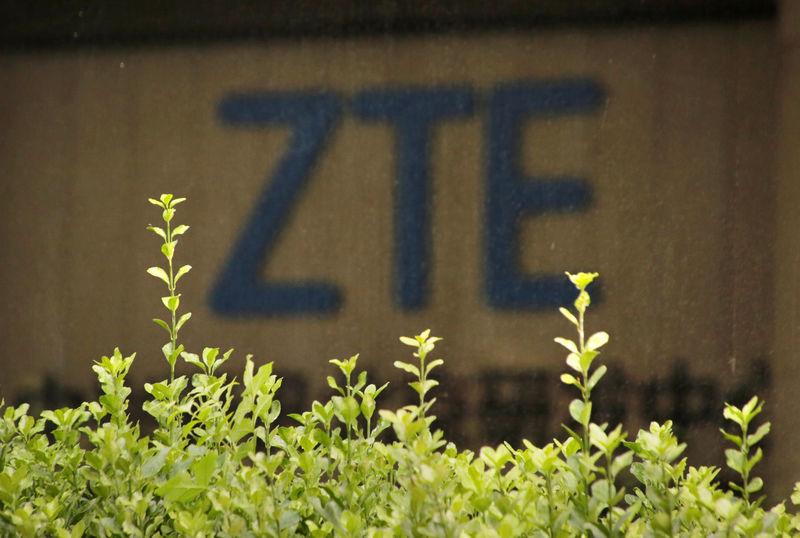 NEW YORK/HONG KONG (Reuters) – China’s embattled ZTE Corp (0763.HK) has received a temporary reprieve from the U.S. government to conduct business needed to maintain existing networks and equipment as it works toward the lifting of a U.S. supplier ban.

ZTE (000063.SZ), which makes smartphones and networking gear, was forced to cease major operations in April after the United States slapped it with a supplier ban, saying it broke an agreement to discipline executives who conspired to evade U.S. sanctions on Iran and North Korea.

The authorization seen by Reuters from the U.S. Commerce Department’s Bureau of Industry and Services runs from July 2 until Aug. 1.

It allows China’s No.2 telecommunications equipment maker to continue operating existing networks and equipment and provide handset customer support for contracts signed before April 15. It also permits limited transfer of funds to or from ZTE.

On Tuesday, ZTE also announced the departure of 1 senior executive in a stock exchange filing, while a source who saw an internal memo told Reuters seven others were removed. As part of its settlement agreement reached in June with U.S. authorities, ZTE had promised to radically overhaul its management.

The company also agreed to pay a $1 billion penalty and put $400 million in an escrow account as part of the deal to resume business with U.S. suppliers – which provide almost a third of the components used in ZTE’s equipment.

ZTE said in exchange filings late on Tuesday that Xu Weiyan, a shareholders’ representative supervisor in the company’s supervisory committee, has resigned due to personal commitments with immediate effect and no longer holds any position in the company.

An insider source told Reuters a memo was sent out on Tuesday announcing the removal of seven other executives, without providing a reason. They included vice presidents Wang Keyou, Xie Jiepeng and Ma Jie, who were in charge of the legal, finance and supply chain departments, respectively.

Reuters could not immediately contact them for comment. The source declined to be identified due to the sensitivity of the matter.

As part of the deal to lift the supplier ban, ZTE had agreed to remove all members of its leadership at or above the senior vice president level, along with any executives associated with the wrongdoing within 30 days.

It is not immediately clear whether the eight departures on Tuesday were related to ZTE’s compliance violation.

ZTE announced a new board last week in a radical management shakeup. Li Zixue was appointed the new chairman while the previous board led by Chairman Yin Yimin resigned with immediate effect.

Despite the agreement reached almost a month ago, the ban is yet to be lifted amid strong opposition among some U.S. politicians. ZTE has made the $1 billion payment but has yet to deposit the $400 million in escrow, according to sources.

The uncertainty over the ban amid intensifying U.S.-China trade tensions has hammered ZTE shares, which have cratered around 60 percent since trading resumed last month following a two-month hiatus, wiping out more than $11 billion of the company’s market valuation.

ZTE’s Hong Kong shares were down 0.5 percent on Wednesday, while its Shenzhen shares were up more than 4 percent.

Jefferies on Monday upgraded ZTE to a “buy” rating from “underperform”. Its analyst, Edison Lee, said in a note on Tuesday that the temporary reprieve was “a very positive indication that ZTE is on track to a full lifting of the export ban”.

A representative for ZTE declined to comment. The U.S. Department of Commerce did not respond to requests for comment.