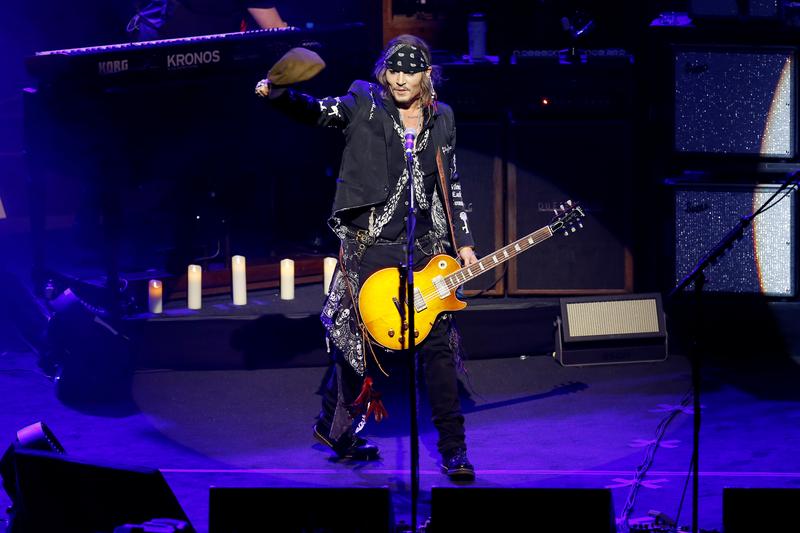 The American trio, all dressed in black with silver chains around their necks, lived up to their reputation as “bad boys” during the 90-minute set.

Cooper, 70, wore gothic eye make-up and carried a black stick, while heavily tattooed Depp, 55, and Aerosmith’s Perry, 67, both appeared to smoke briefly on stage as they played guitar.

“We are the Vampires and we pay homage to our old friends,” Cooper told the crowd as they sang “Raise the Dead”.

In the 1970s, “The Hollywood Vampires” was a drinking club for rockers in Los Angeles founded by Cooper, whose members included Keith Moon and Ringo Starr.

The group was set up in 2015 to honor musicians who died early deaths and during the set photos of artists including Jim Morrison, John Lennon, and Prince flashed on stage.

In addition to playing Cooper and Aerosmith classics, they revisited titles from Led Zeppelin, Jimi Hendrix, David Bowie, and Motorhead.

Depp, with long hair and a black paisley bandana around his head, looked as if he had walked off the set of “Pirates of the Caribbean”, where his role of Jack Sparrow is modeled on Keith Richards of the Rolling Stones.

“I’ve been a villain now for centuries but this song is about a hero,” Cooper said, handing over to Depp who gave a moving rendition of the late Bowie’s hit “Heroes”.

They sang Cooper’s signature hit “School’s Out” – appropriately on the day classes ended in the local area – spicing it up with Pink Floyd’s “Another Brick in the Wall”, before throwing hundreds of guitar pics out to the crowd.

Fans paid up to 335 Swiss francs to attend the concert in Stravinski Auditorium.

Jack White, Nick Cave, Jamie Cullum and Jamiroquai are booked at the 52nd edition of the festival, where the eclectic line-up also includes hip hop and electronic music.

American producer Quincy Jones, 85, attended the Hollywood Vampires concert, days after being honored in Montreux where he served as co-director in the 1990s and which he still calls “the Rolls Royce of all festivals”.