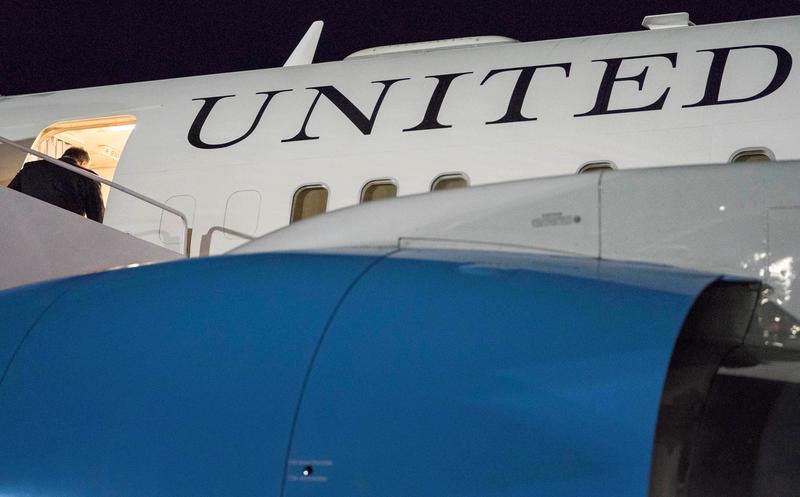 WASHINGTON (Reuters) – The State Department on Thursday denied that the United States had softened its approach toward North Korean denuclearization, as U.S. Secretary of State Mike Pompeo heads to Pyongyang hoping to agree a roadmap for its nuclear disarmament.

U.S. Secretary of State Mike Pompeo boards his plane to travel to Anchorage, Alaska on his way to Pyongyang, North Korea in Andrews Air Force Base, Maryland, U.S. July 5, 2018. Andrew Harnik/Pool via REUTERS

“Nothing could be further from the truth. Our policy toward North Korea has not changed,” State Department spokeswoman Heather Nauert told reporters on the way to Pyongyang.

“We are committed to a denuclearized North Korea and Secretary Pompeo looks forward to continuing his consultations with North Korean leaders to follow up on the commitments made at the Singapore summit,” she added.

Pompeo will spend a day and a half in North Korea on Friday and Saturday on his third trip to Pyongyang, and his first since an unprecedented summit between President Donald Trump and North Korean leader Kim Jong Un in Singapore in June.

It will also be Pompeo’s first overnight stop in Pyongyang, with which the United States had remained technically at war since the 1950-53 Korean War ended in an armistice not a peace treaty.

U.S. Secretary of State Mike Pompeo arrives to board his plane to travel to Anchorage, Alaska on his way to Pyongyang, North Korea in Andrews Air Force Base, Maryland, U.S. July 5, 2018. Andrew Harnik/Pool via REUTERS

At the Singapore summit, Kim made a broad commitment to “work toward denuclearization of the Korean Peninsula,” but has made no mention of how or when Pyongyang might give up a nuclear weapons program that threatens the United States and its allies.

Ahead of the Singapore summit, Pompeo said Trump would reject anything short of “complete, verifiable and irreversible denuclearization.”

But following talks on Sunday between U.S. envoy Sung Kim and North Korean counterparts, this “CVID” language appears to have disappeared from the State Department lexicon.

It says pressure will remain until North Korea denuclearizes, but in statements this week, has redefined the U.S. goal as “the final, fully verified denuclearization of (North Korea) as agreed to by Chairman Kim.”

Some U.S. officials and experts have said the change in language amounted to a softening in the U.S. approach.

After his departure from Washington on Thursday, Pompeo tweeted a photograph of himself boarding his plane and said: “Looking forward to continuing our work toward the final, fully verified denuclearization of #DPRK, as agreed to by Chairman Kim. Good to have press along for the trip.”