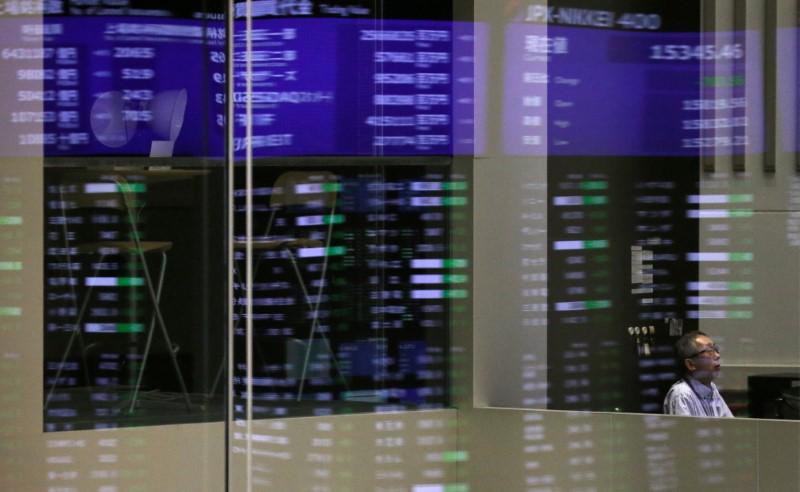 TOKYO (Reuters) – Asian stocks were shaky while major currencies barely budged in early trade on Thursday, as financial markets remained in a state of anxious uncertainty on the eve of a U.S. deadline to slap tariffs on Chinese imports.

MSCI’s broadest index of Asia-Pacific shares outside Japan was down 0.1 percent, having moved in and out of the red in early trade. The index has lost 1.6 percent this week, during which it plumbed a nine-month low.

Asia was bereft of the usual leads as the U.S. markets were closed on Wednesday for the Independence Day holiday.

U.S. stock futures were marginally higher, pointing to a stronger open for Wall Street later in the day.

“The markets lack strong direction without incentives from the United States, where their markets were closed yesterday. Moves by Chinese shares and the yuan remain a key factor in the meantime,” said Masahiro Ichikawa, senior strategist at Sumitomo Mitsui Asset Management in Tokyo.

The United States plans to implement tariffs on $50 billion worth of imports from China as both nations remained locked in a bitter trade dispute that has convulsed global financial markets in recent weeks.

On July 6, tariffs on $34 billion worth of imports will take effect, and Beijing has promised to retaliate in kind.

However, China’s finance ministry did say on Wednesday that it will “absolutely not” fire the first shot in a trade war with the United States and will not be the first to levy tariffs.

“The $34 billion U.S. tariffs figure has been mostly factored by the markets and focus is now on what the United States says on the remaining $16 billion,” Ichikawa said.

In currencies, the euro was little changed at $1.1657. The single currency fell to as low as $1.1630 overnight after weaker confidence in the euro zone overshadowed better-than-expected data on business activity.

The Chinese yuan was slightly lower, its recovery from an 11-month low stalling. A rebound in the yuan was triggered in the past two sessions after the central bank sought to calm nervous markets midweek and stem the currency’s recent tumble.

The yuan was 0.1 percent lower after gaining 0.2 percent against the dollar on Wednesday.

The longer term direction for the yuan was still unclear. China appears broadly comfortable with a weakening yuan and would intervene only to prevent any destabilizing declines or to restore market confidence, policy insiders told Reuters.

The dollar was nearly flat at 110.420 yen, trapped in a narrow range the previous day due to the U.S. holiday, awaiting the minutes from the June Federal Reserve policy meeting due later in the day for immediate cues.

The dollar index against a basket of six major currencies was 0.15 percent lower at 94.510.

Copper and zinc were stuck near one-year lows, having declined steadily over the past month on fears that the U.S.-China trade spat could reduce demand for industrial metals.

Brent crude futures were down 0.65 percent at $77.74 a barrel, losing some steam after two successive days of gains after U.S. President Donald Trump sent a tweet demanding that OPEC reduce prices for crude.

Brent had risen on Wednesday on a threat from an Iranian commander and a drop in U.S. crude inventories.