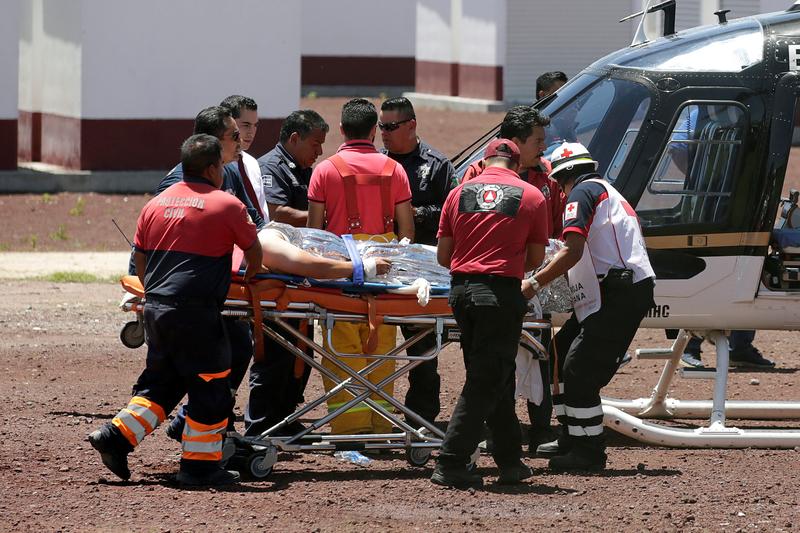 MEXICO CITY (Reuters) – Two explosions at fireworks workshops outside Mexico City on Thursday killed at least 19 people, including rescue workers, and injured dozens more, officials said, in the latest deadly blast to hit a town known for its fireworks production.

Paramedics wheel a stretcher carrying a man injured due to fireworks explosions toward a helicopter in the municipality of Tultepec, on the outskirts of Mexico City, Mexico July 5, 2018. REUTERS/Daniel Becerril

After a first blast in the municipality of Tultepec, firefighters, police and other rescue workers arrived at the scene when a second explosion occurred, the state government said in a statement.

“Emergency crews attended the call of the first explosion, when a second incident occurred, killing and injuring members of these groups,” the statement said.

Television images showed a plume of smoke rising over buildings on the outskirts of Tultepec and scores of firefighters and rescue workers at the scene.

There has been a series of blasts at the fireworks markets, workshops and depots in Tultepec, about 20 miles (32 km) north of Mexico City, including a series of massive explosions in a market in December 2016 that killed around three dozen people.

Puente said the sale of fireworks in the area would be suspended and the permits of manufacturers would be reviewed.