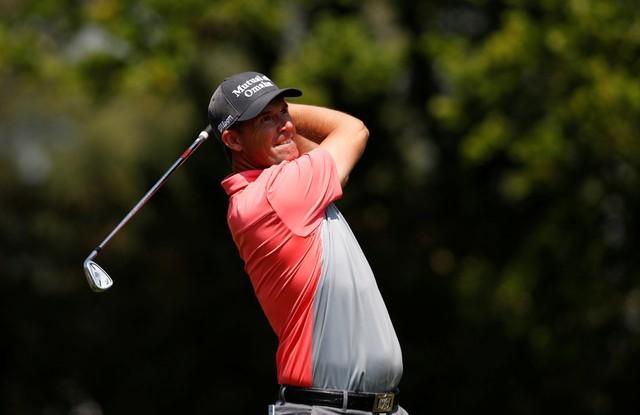 BALLYLIFFIN, Ireland (Reuters) – Padraig Harrington, written off as a no-hoper by the bookmakers, hit back to share the headlines at the Irish Open on Thursday while pre-tournament favorite Rory McIlroy battled to stay in touch with the leaders.

That was one shot better than a seven-strong group including Harrington, Lee Westwood and 2016 Masters champion Danny Willett.

McIlroy, who hosts the event, looked set to challenge before finishing on a two-under-par 70, in a share of 17th place.

Harrington, a three-time Major winner but who has claimed only one title in 10 years, had been quoted at 66-1 for the title by the bookies. The 46-year-old Irishman argued, though, that he was brought up on links golf, he was on home soil and should not be dismissed so easily.

Now ranked a lowly 268th in the world, he proved his point at the majestic venue on the north-eastern tip of Ireland, the highlight of his masterclass coming via a chip-in eagle at the 17th hole.

“It (links golf) definitely plays into my strengths,” he said. “There’s so many ways to play it, play a hole out there. You can carry trouble, lay up short of trouble, you can play to one side where you know even if you’re in the rough you know you’re okay. There’s just a lot going on.”

Fox, like Harrington, hit just one bogey and finished with a monster putt for his sixth birdie. The Kiwi needs a good result to secure a starting slot at next month’s Open at Carnoustie.

Englishmen Westwood, Willett – who has had a wretched run of form since winning the Masters – Ashley Chesters and Robert Rock, along with Frenchmen Adrien Saddier and Matthieu Pavon, were the other players on four under par on Thursday.

Spain’s defending champion Jon Rahm, ranked fifth in the world to McIlroy’s eighth, finished well back after scoring back-to-back double bogeys on the way to a 74.

The Irish Open leads into the Scottish Open next week, followed by the Open Championship at Carnoustie, and offers competitors the perfect opportunity to start honing their skills on a challenging links layout.