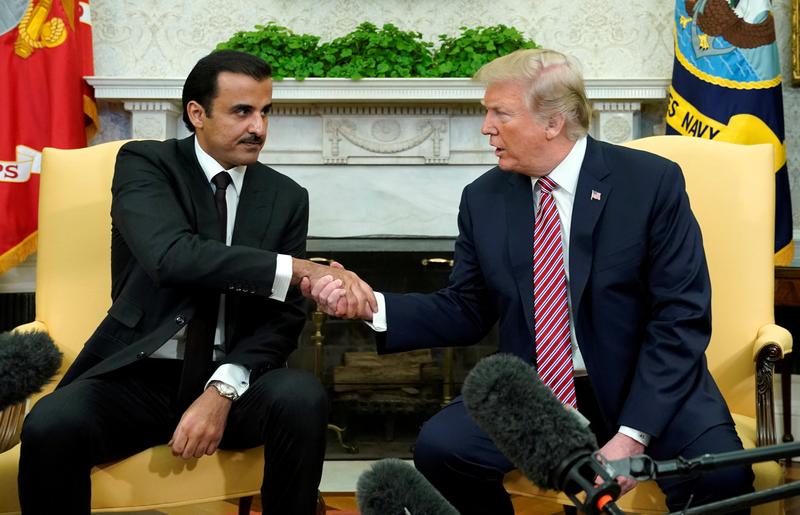 WASHINGTON/NEW YORK (Reuters) – There was much bonhomie as a few dozen people, including members of Congress and U.S. administration officials, gathered last week for dinner in a posh Washington neighborhood in honor of Qatar’s foreign minister.

“You have been a great friend to the United States,” Mnuchin told Thani, praising Qatar for its cooperation on counter-terrorism financing efforts.

The scene was a stark contrast from just a year ago.

Saudi Arabia, the United Arab Emirates, Bahrain and Egypt severed ties with Qatar in June 2017, accusing it of fomenting regional unrest, supporting terrorism and getting too close to Iran, all of which Doha denies.

At the time, a dinner with Qatari officials at a Washington steakhouse to garner support from members of Congress was a muted affair, without anyone with influence in the Trump administration at the event, according to a person who attended. President Donald Trump followed the boycott with tweets suggesting Qatar funded terrorism, even though other U.S. officials emphasized it was an ally.

“When the blockade happened they (Qatar) had no presence on the Hill,” said Joey Allaham, a former adviser to Qatar who was paid $1.45 million, including costs, for his advocacy work.

A year later the boycott remains in force, as the rivals have failed to resolve their dispute. But Qatar has managed to persuade certain lawmakers and influential Americans that it is a U.S. ally in the fight against terrorism and victim of an unfair boycott, interviews with advisers on both sides show.

Several Qatari lobbyists said the aggressive strategy, which has cost the small OPEC member tens of millions of dollars, has been about reaching people close to Trump as well as lobbying on Capitol Hill.

The country has also hired some people seen as close to Trump, pledged billions of dollars in U.S. investments or business and sponsored Doha visits, according to its advisers and public filings.

Qatar’s boycott followed long simmering tensions in the region, with countries such as Saudi and the UAE angry about the tiny but rich Gulf nation’s outsized role in regional affairs, sponsoring factions in revolts and civil wars and brokering peace deals across the Middle East.

The United States, closely allied to countries on both sides, has found itself in the middle and tried unsuccessfully to mediate. Qatar hosts the Middle East headquarters for U.S. air forces. An administration official said the United States fears the rift could allow Iran to enhance its position in the Gulf if Tehran supported the Qataris.

Trump wants “the dispute eased and eventually resolved, as it only benefits Iran,” a U.S. State Department spokeswoman said.

Indeed, since the boycott Iran and Qatar ties have improved. Tehran opened its airspace to Qatar Airways when Saudis and others closed theirs, while Qatar restored full diplomatic relations with Iran.

This boycott violates the “right of an independent country like Qatar to choose its allies,” said an Iranian official, who previously served as ambassador to the UAE.

Yousef Al Otaiba, the UAE ambassador to the United States, said: “Rather than hoping for Washington to enforce a solution to the crisis, Qatar should establish a dialogue directly with the UAE and its neighbors.”

The Saudi embassy in Washington did not respond to a request for comment.

Rich from large natural gas reserves, Qatar has lavished at least $24 million on lobbying in Washington since the start of 2017. That compares with a total of $8.5 million Qatar paid in 2015 and 2016 for lobbying, Justice Department filings show. (For a graphic, click tmsnrt.rs/2N8ZwFr)

It has hired people close to Trump. Former New York City Mayor Rudy Giuliani, for example, said he worked for the Qataris on an investigation and visited Doha just weeks before becoming Trump’s personal lawyer in April.

Giuliani declined to give details, telling Reuters that he has not spoken to Trump about his Qatar work.

Qatar’s opponents have a formidable offensive of their own. The UAE and Saudi Arabia shelled out about $25 million each over the same period and had allies such as Elliott Broidy, a Republican fundraiser also close to Trump.

In May last year, Broidy bankrolled a conference about Qatar and the Muslim Brotherhood, an Islamist group that Egypt and other Doha rivals have accused of terrorism, according to Mark Dubowitz, head of the Foundation for the Defense of Democracies, a think-tank that organized the conference.

It was at this conference that Ed Royce, chairman of the powerful House Foreign Affairs Committee, disclosed plans for a bill naming Qatar a sponsor of terrorism. Royce introduced the bill two days after the conference.

Royce’s office did not respond to a request for comment.

Qatar “swarmed the Hill” to oppose the bill, including appealing to House Speaker Paul Ryan’s office, two lobbyists said. The bill has stalled in Congress.

Ryan’s office referred questions on the bill to Majority Leader Kevin McCarthy, who did not respond to a request for comment.

“Understandably, the Qataris called in all their lobbyists and favors to try to derail the bill, though the final chapter on these issues has yet to be written,” said Broidy, who has sued Qatar for allegedly hacking his emails. Qatar denies his allegations.

Qatar has also reached out to unlikely allies. In January, Qatar’s lobbyists flew Morton Klein, head of the Zionist Organization of America, first class on Qatar Airways and put him up at the five-star Sheraton Grand Doha Resort for meetings with the country’s leaders.

Klein remains critical of Qatar but said in an interview last week that he is encouraged by some steps taken to address his concerns. He said the documentary has not aired and he continues to work with officials on other issues.

Last fall, Trump met Sheikh Tamim on the sidelines of the United Nations General Assembly. A Qatari lobbyist said Doha’s message to the United States was they would spend more money on the American base in the country and buy aircraft from Boeing Co.

Within a week of the meeting, state-owned Qatar Airways said it would buy six Boeing aircraft, valued at $2.16 billion. Boeing declined to comment.

“It took time and resources to replace the blockading states’ lies with the truth, including inviting delegations to visit Qatar and investigate the blockade for themselves,” said Jassim al-Thani, spokesman for the Qatar embassy in Washington.

Additional reporting by John Walcott and Yara Bayoumy in WASHINGTON, Noah Browning in DUBAI and Parisa Hafezi in ANKARA.; Editing By Paritosh Bansal