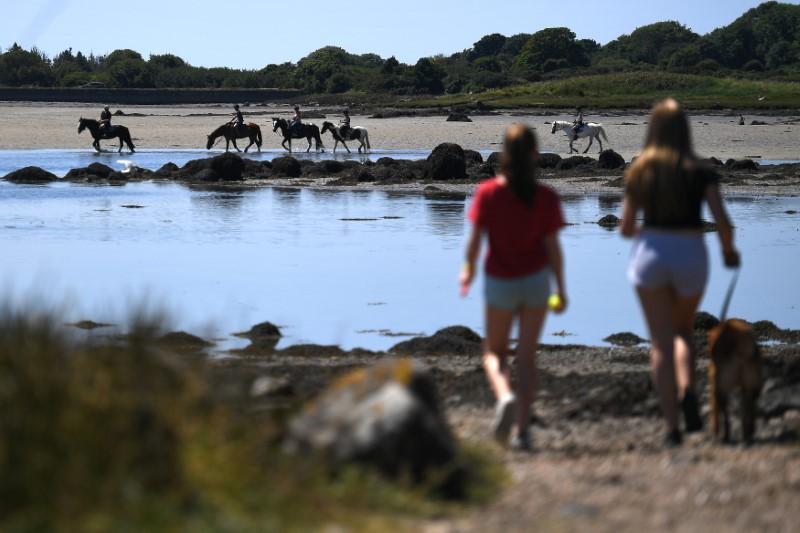 DUBLIN (Reuters) – Ireland is to hold a referendum to remove a clause in the constitution marking the importance of a woman’s “life within the home” and encouraging mothers to shun employment to fulfil domestic duties, the government announced on Thursday.

Women view horses as they bring a dog for a walk on Rusheen beach during sunny weather in Galway, Ireland June 26, 2018. REUTERS/Clodagh Kilcoyne

The move is the latest to update Ireland’s socially conservative 1937 constitution to reflect a more secular and socially liberal population.

Ireland was long one of Europe’s most socially conservative countries, but in recent decades opinions have changed rapidly as the power of the Roman Catholic Church has waned. A 2015 referendum introduced gay marriage into the constitution and a vote earlier this year allowed access to abortion.

The constitution, which includes a number of references to the country’s traditional Christian ethos, currently contains a clause that “recognises that by her life within the home, woman gives to the State a support without which the common good cannot be achieved”.

A second clause obliges the state to “endeavour to ensure that mothers shall not be obliged by economic necessity to engage in labour to the neglect of their duties in the home”.

The government on Thursday passed a motion to delete this “outdated” provision.

“Over 80 years after the Constitution was formally adopted, it is clear that Article 41.2 has no place in our Constitution,” Justice Minister Charlie Flanagan said in a statement.

“It undermines today’s goal to achieve real gender equality by ensuring women have real choices about what to do with their lives,” he said.

The article has been widely criticised, including by the U.N. Committee on the Elimination of Discrimination against Women.

The referendum will take place on the same day as Ireland’s presidential election, which is due by November.

The government in June announced plans to hold a referendum to remove the offence of blasphemy from its constitution on the same day.

There are currently no plans to remove religious references from the constitution, which begins with a reference to “our obligations to our Divine Lord, Jesus Christ”.