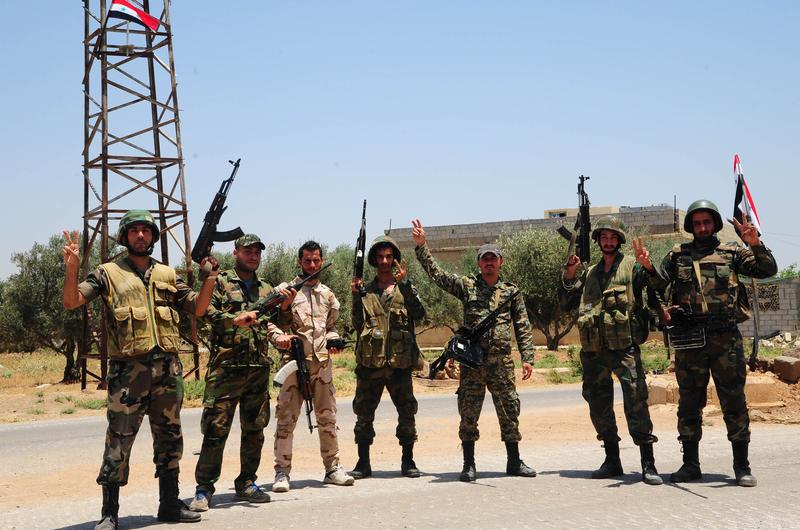 Syrian army soldiers gesture as they pose for a picture in Deraa area, Syria in this handout released on July 4, 2018. SANA/Handout via REUTERS

After four days of reduced bombardment, the intense air strikes had resumed on Wednesday following the collapse of talks between insurgent groups and Russian officers.

Syrian President Bashar al-Assad and his allies are fighting to recapture the southwest, one of the last remaining rebel strongholds in Syria along with a region of the northwest bordering Turkey.

His two-week offensive, backed by Russian air power, has taken a large chunk of rebel territory northeast of the provincial capital of Deraa, as a string of towns surrendered.

The fighting and air strikes have already driven more than a quarter of million people in southwest Syria from their homes, the United Nations said on Monday, seeking shelter along the frontiers with Jordan and Israel.

Both countries have said they will not open their borders to refugees – Jordan took in more than half a million earlier in the war – but have distributed some supplies inside Syria.

Southwest Syria is a “de-escalation zone” agreed last year by Russia, Jordan and the United States to reduce violence.

Near the start of the government’s offensive, Washington indicated it would respond to violations of that deal, but it has not done so yet and rebels said it told them to expect no American military help.