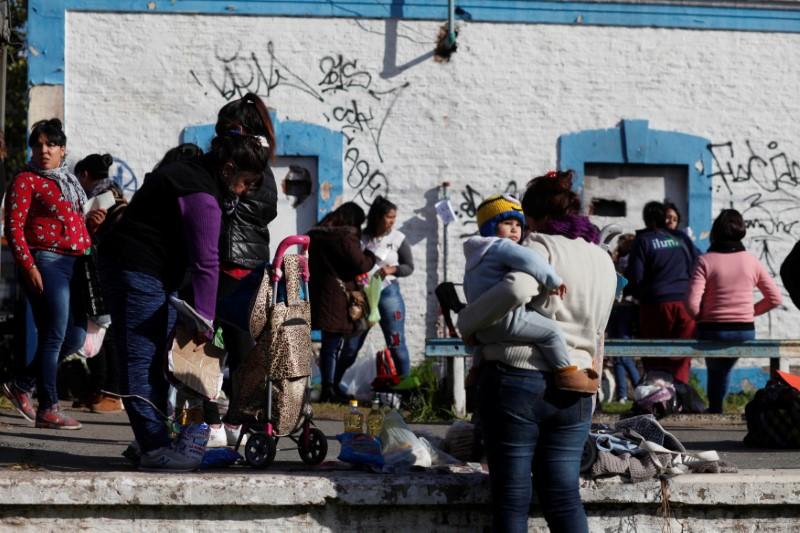 Most are women, some accompanied by children. Cardboard signs with their names scrawled in black marker hang from strings around their necks. They walk slowly around the old concrete platform yelling out the names of people they had agreed to trade with in a forum on Facebook (FB.O).

They are the face of a resurgent but little-reported phenomenon in the suburbs surrounding the Argentine capital – barter clubs.

The clubs have tens of thousands of members and are attracting hundreds more every week. They have become an unofficial economic indicator, showing the toll that soaring inflation and high unemployment are exacting on South America’s second-biggest economy.

The barter clubs have surfaced before, during Argentina’s 2001-2002 economic crisis and in the 2009 global financial meltdown. In between those crises they never completely went away, but today the clubs operate differently. Many members are part of Facebook groups where they arrange trades before exchanging goods in person at places like the railway station.

Membership in the clubs has been soaring in recent months as poor Argentines, many of whom have lost their jobs or work off-the-books, struggle to find the cash to make ends meet. They are one sign that progress made by President Mauricio Macri last year in reducing poverty is beginning to reverse.

The country’s inflation rate is running at above 25 percent, and the currency has lost more than 30 percent of its value this year in a financial crisis that economists say will likely trigger a recession.

With unemployment running at 9.1 percent and many salaries chewed up by years of high inflation, members of the barter clubs bring second-hand goods, rice or homemade produce like desserts to trade.

A 1 kg (2 lb) pack of flour serves as a reference, with a hypothetical value of 30 pesos, or one point. Two packs of flour are worth one bottle of sunflower oil. Four packs of flour is the suggested price for one cake, while three packs can be used to get adult jeans.

When Reuters visited the San Miguel market and one in Merlo, another Buenos Aires suburb, most people seemed to be leaving with food.

HOW ONE FAMILY BARTERS

Cecilia Gómez, whose husband lost his job at a struggling restaurant in February, was among those trading at the market.

“This helps me bring my kids milk, sugar: the things that are most necessary,” she said.

Her husband spent several months working as a cartonero, the local term for people who sift through trash bins for recyclable goods, before finding a new job at a grocery store last month. He earns just 10,000 pesos ($350) per month, far less than his previous salary.

Gómez also receives a 1,000 peso-per-month subsidy from a government welfare program for each of her two children, but after paying 3,700 pesos per month for rent and 1,200 pesos for her husband’s travel to work, there is not enough cash left for basic goods.

Recently, the 30-year-old housewife saw a post on the San Miguel barter club’s Facebook page offering up a pair of boots in exchange for a 0.9 liter bottle cooking oil, two packets of sugar and three packs of crackers.

Gómez desperately needed the boots and accepted the offer even though she didn’t actually have any of the items the poster wanted.

So she made a post of her own asking for those items, and offering in return some used clothes and a bottle of cologne she had bought for her 9-year-old son that he had never opened. After another member accepted the offer, she made both trades in person at the market.

She also brought homemade cakes and alfajores, a shortbread-based treat, to trade in exchange for some milk, flour, oil and sugar to bring home. That trade was also arranged on Facebook.

‘THE MONEY IS NOT ENOUGH’

Barter clubs are not unique to Argentina. Similar clubs have popped up during economic crises elsewhere, such as in rural Greece in 2015 after Athens defaulted on an International Monetary Fund loan and shut down banks to prevent a run on deposits.

The informal nature of bartering groups in Argentina means their growth is difficult to track.  A spokesman for Argentina’s Social Development Ministry declined to comment on the rise in barter clubs.

“There are many new faces – women whose husbands lost their jobs, or those couples who both work and their wages are not enough,” said Galera, who founded the 30,000-member group in April 2016.

The victory of Macri’s ‘Let’s Change’ coalition in midterm congressional elections last October was due in part to improved support among residents in the sprawling, working-class suburbs of Buenos Aires, where the barter clubs are mostly based. His performance raised the likelihood that Macri would be re-elected in next year’s presidential election.

Since then, however, thousands of Argentines have taken to the streets to protest rises of up to 40 percent in utility bills, part of Macri’s plan to cut the government’s budget deficit by trimming subsidies for gas and electricity.

Higher interest rates of up to 40 percent which are meant to stem the fall in the value of the country’s currency, the peso, have cut off access to finance for many businesses. More than 5,000 small and mid-sized businesses have closed in the past two years, according to the government.

As the peso lost value against other currencies in recent months, it became more expensive for Argentina to pay its debts, which are largely denominated in U.S. dollars or euros. So Macri turned to the IMF in May for financial help.

Many in the Buenos Aires area are feeling the pinch from the rise in inflation that has resulted from the currency depreciation.

“The money is not enough,” said Silvia Aranda, the administrator of a barter club with 46,000 Facebook members in Merlo, a suburb of the river-front capital with more than 500,000 residents. “Before, we were getting 100 requests to join per day. Now, it is a lot more.”

Rising inflation this year has had the biggest impact on the roughly 20 percent of Argentine workers who work irregular, off-the-books jobs, said Agustin Salvia, a researcher at the Catholic University of Argentina.

Those workers, who do not benefit from union bargaining agreements that keep salaries above inflation and often find themselves without work during economic slowdowns, make up the bulk of barter club members, Salvia said.

But Galera, the organizer of the San Miguel market, doesn’t need to wait for the new poverty data to know that people are hurting. With more and more people attending her market, she said she plans to ask municipal authorities to grant her a permit for a larger space to trade in.

And housewife Cecilia Gómez will be returning to the market on Friday, again laden with her homemade alfajores. She’s hoping to trade them for milk, detergent and ‘yerba,’ the bitter herb base for Argentina’s signature ‘mate’ infusion.

“That is what I need urgently at home,” she said.