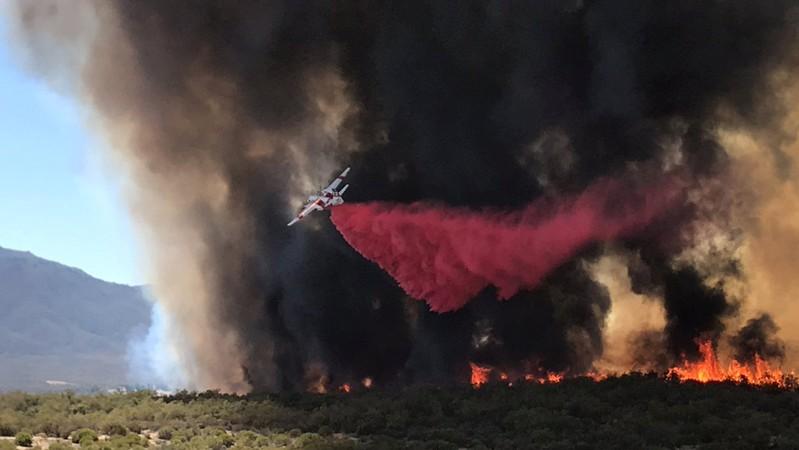 LOS ANGELES/DENVER (Reuters) – Crews made determined efforts on Thursday to cut containment lines around a wildfire that has already burned across some 135 square miles in Northern California – warning that triple-digit temperatures forecast for coming days could fan the flames.

The so-called County Fire, which broke out on Saturday some 45 miles northwest of Sacramento, has so far burned largely away from populated areas, although some 1,000 homes were said to be in danger.

“The fire burned throughout the night with little recovery from the relative humidity,” the California Department of Forestry and Fire Protection said in a statement on its website.

“The weather will become hotter and drier into the weekend and fire growth potential remains high,” Cal Fire said. The National Weather Service has forecast temperatures over 100 degrees Fahrenheit as the state bakes under a heat wave.

More than 3,400 firefighters working the blaze with help from water-dropping aircraft and bulldozers had gained 30 percent containment of the blaze as of Thursday. Crews have had to cope with strong wind gusts, difficult terrain and dry vegetation.

The County Fire is one of three dozen major blazes burning out of control across the U.S. West during an unusually active fire season.

An air tanker drops retardant on wildfire called “BentonFire” near off Benton Road and Crams Corner Drive in this image on social media in Anza in Riverside County, California, U.S., July 4, 2018. Courtesy California Department of Forestry and Fire Protection/Handout via REUTERS

Fires burned through nearly 2.5 million acres in the United States from Jan. 1 through Monday, well above the average of about 2.3 million acres for the same period over the last 10 years, according to the National Interagency Fire Center.

In Colorado, nine major wildfires have charred more than 198,000 acres, according to the Rocky Mountain Coordination Center.

Crews battling the Spring Fire got a respite from the hot temperatures on Thursday, with rain forecast to move over the region, but heavy downpours could trigger flash flooding over the burn scar, according to InciWeb, a federal wildfire website.

Near Aspen, the Lake Christine fire grew to nearly 5,000 acres overnight and destroyed three homes in the town of EL Jebel, the Eagle County Sheriff’s Office said. There is no containment on the fire, and some 500 people are under evacuation orders.

Two people were cited for misdemeanor arson, accused of igniting the blaze when they used bullets with so-called tracer rounds while target shooting at a local gun range, sheriff’s spokeswoman Amber Barrett said.

The sheriff’s office sent out a tweet in Spanish, telling illegal immigrants fleeing the flames not to fear going to evacuation shelters. Rumors that agents from U.S. Immigration and Custom Enforcement were waiting for them outside the centers are “completely false,” the sheriff’s office said.

The Federal Emergency Management Agency has authorized federal funds to pay up to 75 percent of firefighting costs for three wildfires burning in Colorado and one in Utah.

State and local agencies are eligible for the grants when wildfires burn outside federal land and threaten infrastructure such as water supplies and power grids, she said.