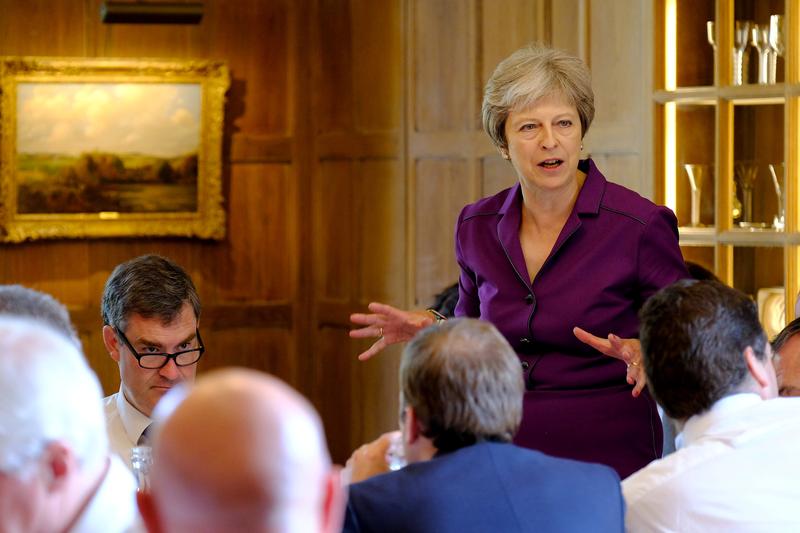 LONDON (Reuters) – British Prime Minister Theresa May secured cabinet agreement on Friday for her plans to leave the European Union, overcoming deep rifts among her ministers to win support for “a business-friendly” proposal to try to spur stalled Brexit talks.

Britain’s Prime Minister Theresa May commences a meeting with her cabinet to discuss the government’s Brexit plans at Chequers, the Prime Minister’s official country residence, near Aylesbury, Britain, July 6, 2018. Joel Rouse/MOD/Handout via REUTERS

Below are the key points from a government statement issued following a meeting of senior ministers:

1. a substantial evolution in our proposals for the UK’s future relationship with the EU;

2. agreement on the benefits of the model that should result from this position

3. the need to step up preparedness for the full range of scenarios that might result from the negotiations.

The government’s full ‘white paper’ policy document due to be published next week will cover four main areas. These are set out below as in the statement:

1. The UK and the EU would maintain a common rulebook for all goods including agri‐food, with the UK making an upfront choice to commit by treaty to ongoing harmonisation with EU rules on goods, covering only those necessary to provide for frictionless trade at the border.

These rules are relatively stable, and supported by a large share of our manufacturing businesses.

The UK would of course continue to play a strong role in shaping the international standards that underpin them, and Parliament would have oversight of the incorporation of these rules into the UK’s legal order – with the ability to choose not to do so, recognising that this would have consequences.

We would strike different arrangements for services, where it is in our interests to have regulatory flexibility, recognising the UK and the EU will not have current levels of access to each other’s markets.

2. The UK and the EU would ensure a fair trading environment by incorporating strong reciprocal commitments related to open and fair trade into the legal agreements that define the future relationship.

The UK would commit to apply a common rulebook on state aid, and establish cooperative arrangements between regulators on competition.

In keeping with our commitments to uphold international standards, the UK and the EU would also agree to maintain high regulatory standards for the environment, climate change, social and employment, and consumer protection – meaning we would not let standards fall below their current levels.

3. The UK and the EU would establish a joint institutional framework to provide for the consistent interpretation and application of UK‐EU agreements by both parties.

This would be done in the UK by UK courts, and in the EU by EU courts – with due regard paid to EU case law in areas where the UK continued to apply a common rulebook.

This framework would also include robust and appropriate means for the resolution of disputes, including through a Joint Committee and in many areas through binding independent arbitration – accommodating through a joint reference procedure the role of the Court of Justice of the European Union (CJEU) as the interpreter of EU rules, but founded on the principle that the court of one party cannot resolve disputes between the two.

4. The UK and the EU would work together on the phased introduction of a new Facilitated Customs Arrangement that would remove the need for customs checks and controls between the UK and the EU as if a combined customs territory.

This would enable the UK to control its own tariffs for trade with the rest of the world and ensure businesses paid the right or no tariff in the vast majority of cases upfront, and otherwise through a repayment mechanism.

It remains our firm view that it is in the best interests of both sides to reach agreement on a good and sustainable future relationship. But we also concluded that it was responsible to continue preparations for a range of potential outcomes, including the possibility of ‘no deal’.

Given the short period remaining before the necessary conclusion of negotiations this autumn, we agreed preparations should be stepped up.