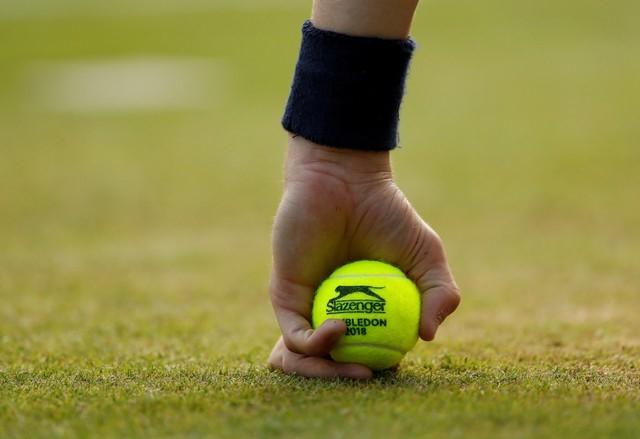 LONDON (Reuters) – Top seed and defending champion Roger Federer continued his serene run at Wimbledon as he strolled into the last 16 with 6-3 7-5 6-2 win over Germany’s Jan-Lennard Struff on Friday.

The 36-year-old Swiss, chasing a ninth title at the All England Club, extended his winning streak to 29 sets in a row.

The 36-year-old American has progressed to the second week without dropping a set but her sister Venus became the eighth of the top 10 seeds to be knocked out of the championships.

Earlier in the day, U.S. Open finalist Madison Keys also struggled to find her rhythm in her 7-5 5-7 6-4 defeat by Russian qualifier Evgeniya Rodina.

Highlights from day five of the Wimbledon championships on Friday (times GMT):

Top seed and defending champion Roger Federer needed just over an hour and a half to book a fourth-round spot by beating big-serving German Jan-Lennard Struff 6-3 7-5 6-2.

The 36-year-old Swiss extended his winning streak to 29 consecutive sets at the All England Club.

“I think I can be very happy today,” said Federer, who will next face France’s Adrian Mannarino.

“It’s a wonderful feeling walking out there, I try to put on a good match and try hard every time, regardless of how many times I’ve played at Wimbledon. It’s the most special court for me, hundreds of thousands must have come to see me play here.”

Seventh seed Karolina Pliskova came back from a set down to beat Romania’s Mihaela Buzarnescu 3-6 7-6(3) 6-1 in the third round.

The ninth-seeded American will face Greek teenager Stefanos Tsitsipas for a place in the quarter-finals.

Seven-times champion Serena Williams rallied from 5-3 down in the second set to put away France’s Kristina Mladenovic 7-5 7-6(2).

The American 25th seed moved into the second week without dropping a set and will next face Russian qualifier Evgeniya Rodina.

“This is only my second serious tournament back,” said Williams, who is returning from a maternity leave.

“I worked really, really hard (to get back playing) and it’s been a long, arduous road but I always expected to come out and do the best I can do.”

Tsitsipas, seeded 31st, becomes the first Greek man to reach the fourth round at a Grand Slam.

German Julia Goerges, who had lost in the opening round in her previous five Wimbledon appearances, edged past Czech Barbora Strycova 7-6(3) 3-6 10-8 in just under three hours on Court Two.

Kiki Bertens grabbed a decisive break in the 18th game to beat ninth-seeded Venus Williams 6-2 6-7(5) 8-6 and reach the fourth round at Wimbledon for the first time.

Venus became the eighth top-10 player in the women’s draw to crash out this week.

1440 KEYS STUMBLES OUT WITH SERENA ON HER MIND

American Madison Keys admitted the possibility of facing compatriot Serena Williams in the next round played on her mind as she suffered a surprise defeat by Russian qualifier Evgeniya Rodina.

“Honestly, I think for the first time in a long time it was… like, I had no idea what my draw was and all of a sudden I came in here the other day, it was like, so if you win, then you play this person (Serena),” she told reporters.

“And I think that kept being in the back of my mind. I felt my mind go, you know, and move on. I don’t think I did a good job of keeping in the moment and playing the person who was in front of me.”

“I’m very happy (to make the last 16 for the first time), long time I’ve been chasing for that,” said Monfils, who will next face South African Kevin Anderson.

After trailing two sets to one on Thursday, fourth seed Alexander Zverev dropped just three games on Friday to overcome American Taylor Fritz 6-4 5-7 6-7(0) 6-1 6-2 in the second round.

“Stopping yesterday two sets to one down was not a nice feeling, I came out today and knew I would have chances,” said Zverev, who will face Latvia’s Ernests Gulbis in the third round on Saturday.

“I am happy to be able to play in the third round tomorrow. The match today showed I can’t take anything for granted. I hope I can win a few more matches here and the German crowd can watch some tennis.”

U.S. Open finalist Kevin Anderson struck an impressive 42 winners on his way to the fourth round, beating Germany’s Philipp Kohlschreiber 6-3 7-5 7-5.

Russian qualifier Evgeniya Rodina outplayed an erratic Madison Keys in a 7-5 5-7 6-4 victory to reach the fourth round of a Grand Slam for the first time in her career.

French Open semi-finalist Keys struggled for most of the match as she committed 48 unforced errors in a disappointing display.

Reporting by Hardik Vyas and Shrivathsa Sridhar in Bengaluru; editing by Clare Fallon and Ed Osmond