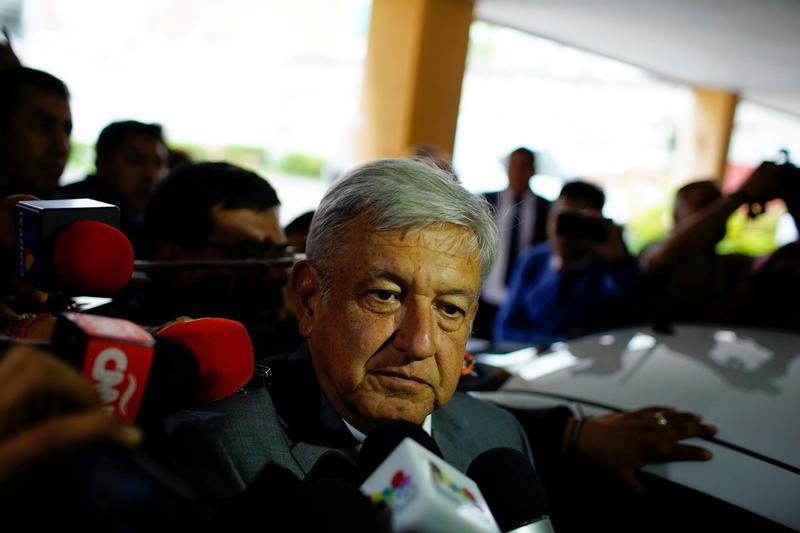 MEXICO CITY (Reuters) – Mexican President-elect Andres Manuel Lopez Obrador’s transition team unveiled a plan on Friday to shake up the fight against crime, including reduced jail time but stiffer controls on weapons, as the country reels from a militarized drug war.

The concept of “transitional justice” is part of the incoming government’s integral security strategy, Olga Sanchez, Lopez Obrador’s proposed interior minister, told Reuters in an interview before her team unveiled the plan.

Transitional justice typically involves leniency for those who admit guilt, truth commissions to investigate atrocities and the granting of reparations for some victims.

“Not only will it be amnesty, it will be a law to reduce jail time,” Sanchez said.

“We will propose decriminalization, create truth commissions, we will attack the causes of poverty, we will give scholarships to the youth and we will work in the field to get them out of the drug situation.”

Lopez Obrador, a leftist who handily won the presidency on Sunday, wants to rewrite the rules of the drug war, suggesting a negotiated peace and amnesty for some of the very people currently targeted by security forces. [nL1N1TX09G]

Sanchez had said the new administration, which takes office on Dec. 1, would move fast to reconsider drug policies and use of the military that, despite toppling some high-profile kingpins, failed to prevent more than 200,000 murders since first adopted in 2006.

“It’s an integrated public policy,” Sanchez said, adding the aim was to “pacify” the nation.

Lopez Obrador’s pick for security minister, Alfonso Durazo, said the administration would aim to remove a significant part of the military from the streets within three years, while professionalizing local police.

He said the government would combat corruption in the ports, and seek to establish stricter customs controls to stop illegal weapons from entering the country.

To consider the possibility of a negotiated peace, Sanchez’s team has studied Colombia’s peace process with its biggest guerrilla group, which allowed rebel leaders to avoid prison.

After the Mexican plan is reviewed by Lopez Obrador, Sanchez said the amnesty idea would be presented as a public referendum. If it receives public support, the administration would then put it before Congress, where Lopez Obrador’s National Regeneration Movement and allies gained seats on Sunday, she added.

The concept could mirror a similar strategy enacted in 1940 by Lazaro Cardenas, who was then president, Sanchez said.

Cardenas decriminalized drugs, authorized doctors to prescribe narcotics for addicts, opened up clinics for addicts and proposed treating them as patients instead of criminals.

The purchase of small quantities of marijuana, cocaine and heroin was made legal and the state controlled their sale. Lower-level criminals were freed from jails.

However, the radical changes only lasted six months as shortages of cocaine and morphine during World War Two prompted the law to be canceled.

The modern-day militarized drug fight, Lopez Obrador argues, has failed to stop narcotics smuggling and violence, and does not address the poverty that leads many to the drug trade.

His new plan was developed in consultation with human rights groups, religious leaders and the United Nations, though details are still being worked out.

“It’s a change in everything: in combat, in social policy, in drug policy, in politics against violence, a very important change in our country starting with Andres Manuel,” Sanchez said.