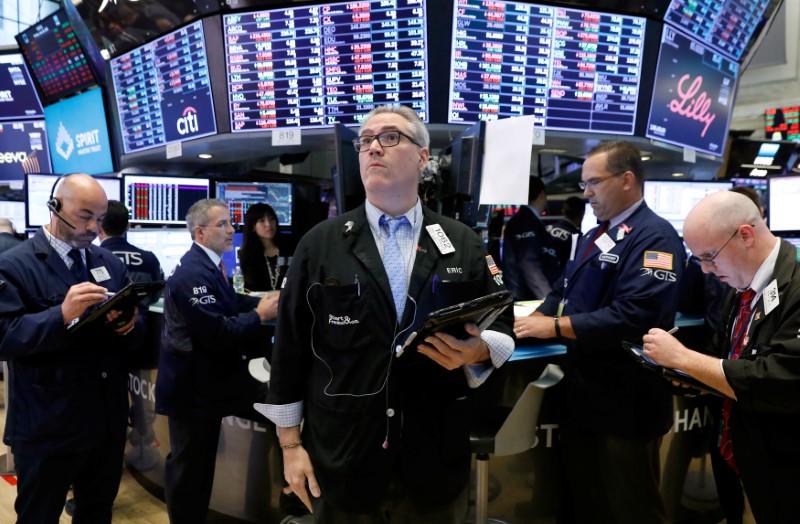 NEW YORK (Reuters) – With the United States and China finally formalizing tit-for-tat import tariffs, Wall Street is gearing up to dissect U.S. corporate earnings in the coming weeks for signs of a trade war impact and whether it will affect spending plans.

The United States and China slapped duties on $34 billion worth of each others’ imports on Friday, escalating their conflict and suggesting there was little sign the dispute will soon end.

Machinery, aerospace and other industrial names have been among the hardest hit. S&P 500 industrials .SPLRCI have fallen more than 5 percent since March 1, when U.S. President Donald Trump said he would impose steep tariffs on steel and aluminum, while the S&P 500 .SPX has risen more than 1 percent in that period.

Following the tax package approval, expectations were high that companies would ramp up not just buybacks and dividends but capital spending in 2018, said Quincy Krosby, chief market strategist at Prudential Financial in Newark, New Jersey.

“What we’re hearing from a number of CFOs is if the trade issue continues to dominate the headlines and create even more uncertainty, those plans may be on hold,” she said.

In the first quarter, year-over-year S&P 500 capital expenditure growth was the highest since 2011, according to S&P Dow Jones data.

Strategists at DataTrek Research in New York said in a recent note the “primary planning headache” for corporate managers in the second half of the year will come from uncertainty related to trade and tariffs.

“The major concern is the supply chain. So many little parts for almost everything are manufactured in China, and there can be a real hold-up in manufacturing because of these tariffs… It is all a balancing act,” said Tim Ghriskey, chief investment strategist at Inverness Counsel, in New York. “For every company hurt, there’s a company that’s being helped. So this isn’t negative for everyone by any means.”

Reporting on the second quarter kicks into gear next week, with results Friday from JPMorgan Chase (JPM.N), Wells Fargo (WFC.N) and Citigroup (C.N). More than 200 S&P 500 reports are due the following two weeks, including from some U.S. companies that could be caught in the middle of a U.S. trade war with China.

They are expected to include results from Honeywell (HON.N), Boeing (BA.N), Whirlpool (WHR.N) and Western Digital (WDC.O), while results from Caterpillar (CAT.N) are due July 30.

Profit forecasts that include a potential tariff impact will perhaps even overshadow second-quarter earnings growth, which analysts say could equal or surpass the first-quarter’s 26.6 percent year-over-year increase. That was the biggest since the fourth quarter of 2010, according to Thomson Reuters data.

“That dominates the landscape at the moment. The impact isn’t going to be on earnings already made; it could though impact the accompanying guidance to the extent management offers any,” said Mark Luschini, chief investment strategist at Janney Montgomery Scott in Philadelphia.

Though consumer discretionary shares have been among the best performers this year, UBS analysts said import tariffs could be a worry for the retail industry.

Harley Davidson (HOG.N) drew attention in June when it warned of a financial toll from trade tensions, and the trade dispute in general has created uncertainty for investors struggling to value stocks at a time strong corporate profits might otherwise help carry the bull market through its 10th year.

Some investors say much of the negative news has already been priced into the market, suggesting stocks could gain as earnings are reported.

“The earnings season has the potential to draw more money into the market,” said Bucky Hellwig, senior vice president at BB&T Wealth Management in Birmingham, Alabama.

Savings from the U.S. tax overhaul are continuing to boost corporate bottom lines, he said.

The tariff impact has yet to show up in earnings forecasts, even though trade tensions were a worry heading into first-quarter results as well.

Estimates for S&P 500 second-quarter profit growth actually have risen slightly since April, putting the latest forecast at around 20.7 percent, based on Thomson Reuters data. Given that the majority of companies typically beat analysts’ earnings expectations, that number is likely to rise.

But other risks to earnings are mounting as well, including rising interest rates and a strengthening U.S. dollar, which strategists say could be more of a problem in the second half of the year if it continues on the same path.

Higher commodity and labor costs are on the list of profit worries as well.