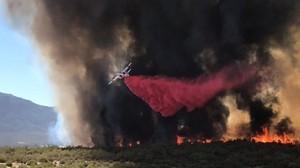 LOS ANGELES/DENVER (Reuters) – A wildfire in northern California killed one person, destroyed buildings, forced the evacuation of hundreds of people from nearby communities and prompted the governor to declare a state of emergency.

The Klamathon Fire broke out on Thursday and, within hours, spread from an initial 1,000 acres to 8,000 acres (3,237 hectares), the California Department of Forestry and Fire Protection said in an advisory.

One person has died due to the fire, a spokeswoman for the agency said on Friday, without providing any details.

The blaze destroyed an unknown number of structures and forced residents in the small communities of Hornbrook, Hilt and Colestein Valley to flee as flames crossed Interstate 5 near the California and Oregon border, local media reported.

California Governor Jerry Brown declared a state of emergency for the area, allowing state resources to be devoted to fighting the wildfire and keeping people safe.

The Klamathon Fire was one of more than three dozen wildfires that firefighters were battling in California and across the U.S. West during an unusually active fire season.

Fires have razed through more than 2.8 million acres in the United States this year through Thursday, above the average of about 2.4 million acres for the same period over the last 10 years, according to the National Interagency Fire Center.

Firefighting efforts across the region have been hampered by blistering temperatures, low humidity and erratic winds.

Crews in Northern California tried on Thursday to cut containment lines around the County Fire, which has already burned across some 135 square miles. Nine structures have been destroyed and some 100 homes were said to be in danger.

That blaze, which broke out on Saturday in steep, inaccessible terrain about 45 miles northwest of Sacramento and spans more than 88,000 acres, has so far largely burned away from populated areas. It was 37 percent contained early on Friday, officials said.

The weather will become hotter and drier into the weekend, Cal Fire warned.

In Colorado, nine major wildfires have razed through more than 216,000 acres, according to the Rocky Mountain Coordination Center.

Crews battling the Spring Fire got a respite from hot temperatures on Thursday, with rain forecast for the region, although heavy downpours could trigger flash flooding over the burn scar, according to InciWeb, a federal wildfire website.

Near Aspen, the Lake Christine fire has enveloped more than 5,000 acres and destroyed three homes in the town of EL Jebel, the Eagle County Sheriff’s Office said. The fire has not been contained and some 500 people have been ordered to evacuate.

Additional reporting by Brendan O’Brien in Milwaukee and Makini Brice in Washington; Editing by Larry King and Bernadette Baum