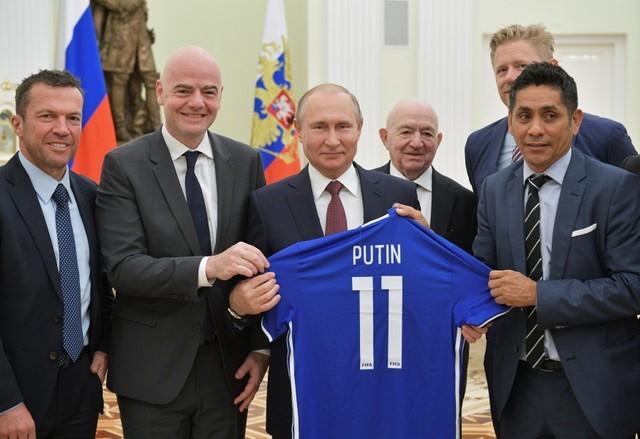 MOSCOW (Reuters) – Russian President Vladimir Putin said on Friday that his country’s hosting of the soccer World Cup had helped debunk stereotypes about it.

Russia’s host nation status had been met with resistance by some in the West who suggested the tournament could be unsafe and play into the hands of Putin, who stands accused by Washington of conducting “malign activities” around the world.

But the month-long tournament, which ends on July 15, has so far been without major security incidents. Concerns about racism and hooligan violence that were discussed in the run-up have not been borne out and most visiting fans have spoken of a positive experience.

At a meeting with FIFA president Gianni Infantino and former soccer stars at the Kremlin, Putin said the tournament and its coverage on social media had “helped break many stereotypes about Russia”.

“People have seen that Russia is a hospitable country, a friendly one for those who come here,” Putin said.

“I’m sure that an overwhelming majority of people who came will leave with the best feelings and memories of our country and will come again many times.”

Increasingly isolated on the global stage, Putin has used the tournament to send a defiant message to his opponents that Russia is succeeding despite Western efforts to hold it back.

The Kremlin shrugged off on Thursday a fresh demand from Britain that it provide details about the Novichok nerve agent attack on a former double agent and his daughter in March after two British citizens were struck down this week with the same poison. Russia denies involvement in either attack.

Moscow’s pedestrian streets have been flooded with fans and locals who have celebrated the world’s most prestigious soccer tournament until the small hours of the morning.

“I was told people, police in the Red Square are smiling,” Infantino told Putin, laughing.

“When they are asked for some information, they are very friendly. This is great. This is exactly what Russia is. This is the new image that we have about Russia.”

The Russian team’s unexpected success at the World Cup has also added to the event’s appeal in the country.

After entering the tournament as the lowest-ranked side, Russia made it through to the knockout stage for the first time in post-Soviet history before upsetting Spain to make it to the quarter-finals.

Russia will face Croatia in the quarter-finals in Sochi on Saturday.