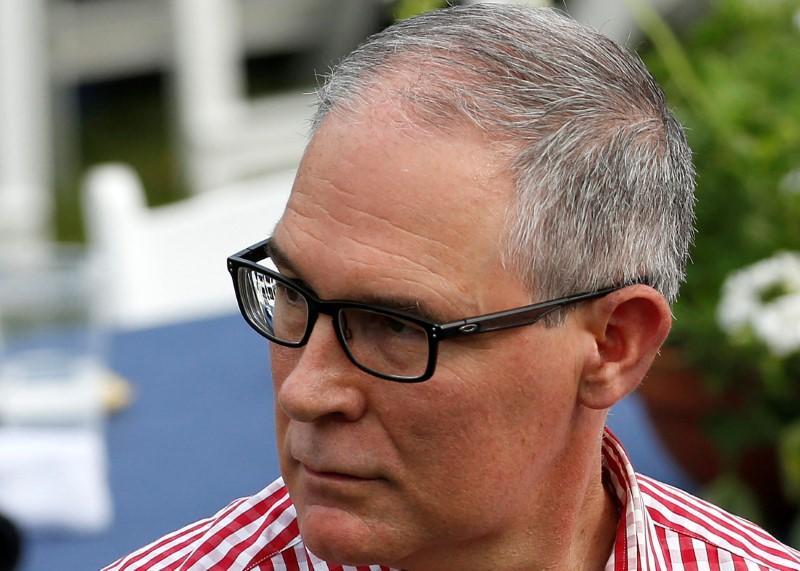 NEW YORK (Reuters) – Corn farmers and biofuels producers cheered the resignation of U.S. Environmental Protection Agency chief Scott Pruitt in the hope that his successor may give them more access and fewer threats to reducing domestic requirements.

Pruitt led U.S. President Donald Trump’s aggressive efforts to roll back environmental protections. He drew the ire of farmers and antagonized their powerful lobby in Washington when he relaxed enforcement of a mandate to include biofuels such as ethanol – made from grains – in the country’s gasoline and diesel supply. Biofuels are an important source of demand for corn.

Pruitt resigned on Thursday after heavy criticism in Congress for ethics-related controversies.

His temporary replacement is Deputy Administrator Andrew Wheeler, a former Senate staffer and lobbyist who had done a stint at the EPA earlier in his career. He is a long-time Washington insider with connections to oil, coal and biofuels.

Wheeler is best known for his work with coal firms such as Murray Energy. He has also consulted for biofuels association Growth Energy and agricultural merchant and biofuels producer Archer Daniels Midland Co, according to his public financial disclosures.

He takes the helm at a time of uncertainty over the agency’s approach to the U.S. Renewable Fuel Standard (RFS), a 2005 law that requires greater use of biofuels such as ethanol in the nation’s fuel.

Midwest farmers and their representatives say Pruitt weakened the RFS by trying to lower the costs of compliance for oil refiners.

Wheeler may pursue some of the similar goals, biofuels groups say, but they believe he will be more transparent and not “color outside the lines” as they claim Pruitt did.

It is unclear exactly what Wheeler’s plans are for the RFS, but during a Senate hearing in November, he said in response to questioning that he respected the program as the “law of the land.”

“No one can bank on the outcome, but a fair process is bankable with Andy Wheeler,” Brooke Coleman, head of the Advanced Biofuels Business Council, said on Friday.

Wheeler is more of a pragmatist and likely to pay more heed to the way things are typically done in Washington, said Michael McAdams, head of the Advanced Biofuels Association.

“The difference is … Pruitt had an absolute disdain for Washington,” McAdams said. “Pruitt went behind closed doors and took an authoritative position. That’s not how Andy will operate.”

Biofuels groups said Pruitt’s decisions on the mandate were curbing domestic ethanol consumption. Under Pruitt, the EPA issued mass waivers for small refineries from their annual requirements to use biofuels. Ethanol and farm groups have sued the EPA over the refinery exemptions.

Ongoing discussions among refiners, farm groups, politicians and officials on changes to the RFS have led to a growing rift between two of Trumps constituencies: the oil and farm lobbies.

Trump himself has personally waded into the debate but has been unable to broker a deal that would satisfy both sides. They reached an impasse a month ago when powerful Iowa Republican Senators Grassley and Joni Ernst fought against some of the changes being pushed by Republican Senator Ted Cruz from Texas and oil refiners.

In a Tweet on Thursday afternoon Ernst said: “I have confidence that Andrew Wheeler will be a good partner at #EPA, and I look forward to working with him on the #RFS.”

The Senate confirmed Wheeler in April with a 53-45 vote, that went mostly along party lines.