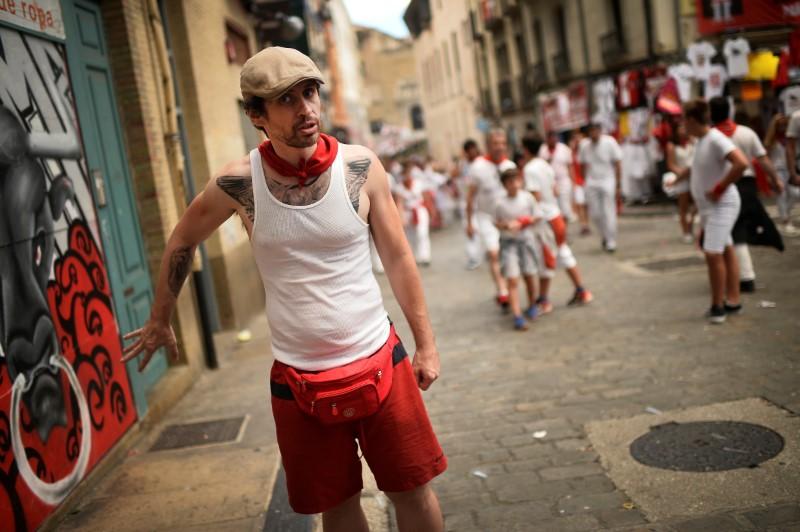 PAMPLONA, Spain (Reuters) – “Buffalo” Bill Hillmann is often asked for his tips by those hoping to run with the bulls in Pamplona and he always gives the same answer: “Don’t.”

FILE PHOTO: U.S. author and bull-runner Bill Hillmann,stands at the spot where he was gored in the buttock on Friday during the bull run at the San Fermin festival in Pamplona, Spain July 9, 2017. REUTERS/Vincent West

Immortalized by Ernest Hemingway in “The Sun Also Rises,” the nine-day San Fermin festival sees thousands descend on northern Spain to watch participants run from bulls along an 875-metre course through narrow streets.

Chicago-born Hillmann, 36, first took part in 2005 and has since become a devoted fan, later authoring a book on his experiences, bull running and the local culture.

In that time Hillmann has been gored twice, though ultimately he decided to keep running.

“The psychological burden of being injured like that is a struggle,” he said.

The running of the bulls is dangerous and participants have died, most recently a 27-year-old man in 2009. But in general only a tiny fraction of the roughly two thousand who take part in each sprint are injured.

On the opening day of the 2018 festival, which fell on a Saturday, traditionally the most dangerous day of the festival due to the number of people who participate, one person was gored and a further four received minor injuries.

“My most important tip,” said Hillmann, “the most important tip anyone could ever … give you on the running of the bulls is: don’t run, don’t do it, it’s not worth it, you can die, you can get seriously injured for life, you can see some really horrible things that you can never forget.”