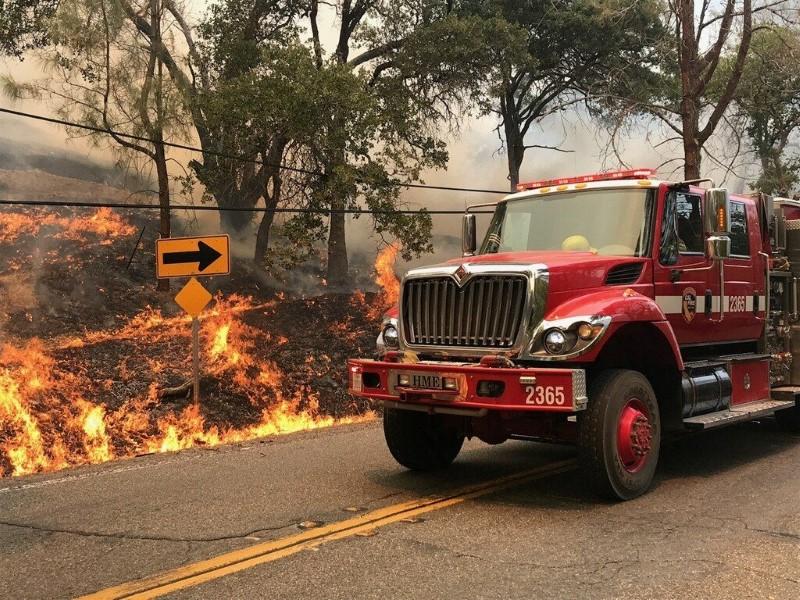 LOS ANGELES (Reuters) – Crews fighting a fast-moving Northern California wildfire on Friday discovered the charred remains of a person apparently caught in the flames, sheriff’s officials said, marking the first fatality in a particularly intense fire season across the state.

Investigators were trying to identify the person found in the debris of a home burned to the ground by the Klamathon fire, which broke out Thursday near the Oregon border during a blistering heat wave and quickly blackened more than 8,000 acres (3,237 hectares).

“We don’t know who it is, we’re trying to do best we can to identify the person,” said Lieutenant Jeremiah LaRue if the Siskiyou County Sheriff’s Office.

Governor Jerry Brown has declared a state of emergency for Siskiyou County, where flames have destroyed homes, forced the evacuation of some 400 people, knocked out power and temporarily forced the closure of Interstate 5, a major north-south artery running the length of California.

“I find that conditions of extreme peril to the safety of persons and property exists in Siskiyou County,” Brown said in his proclamation, which frees up state resources to be devoted to fighting the wildfire.

The Klamathon is one of three dozen major wildfires that firefighters were battling across the U.S. West as the region bakes under triple-digit temperatures that shattered records, strained power grids and prompted the National Weather Service to issue warnings.

Downtown Los Angeles set a record for July 6 when temperatures reached 95 degrees Fahrenheit by 10:15 a.m., before climbing to 106 degrees shortly before 3 p.m.

Fires have raged through more than 2.8 million acres in the United States this year through Thursday, above the average of about 2.4 million acres for the same period over the last 10 years, according to the National Interagency Fire Center.

Fire-fighting efforts across the Southwest have been hampered by the scorching heat, low humidity and erratic winds.

Elsewhere in Northern California, crews have cut containment lines around an estimated 37 percent of the County Fire in Yolo County, which has burned across some 135 square miles (350 sq km), destroying nine structures and putting 100 homes in danger.

That blaze, which broke out on Saturday in steep, inaccessible terrain about 45 miles (72 km) northwest of Sacramento, has so far largely burned away from populated areas.

In San Diego County, a blaze dubbed the West fire that broke out near the community of Alpine on Friday, was spreading quickly. Sheriff’s officials said multiple structures had been burned and urged immediate evacuations for at least one neighborhood.

In southern Colorado, a steady rain overnight slowed the growth of the largest wildfire in the state, which allowed crews to carve containment lines around 35 percent of the blaze.

The Spring Fire has blackened nearly 106,000 acres and destroyed at least 141 buildings since it ignited on June 27. It is the second-largest wildfire on record in Colorado. Authorities have accused a Danish national of setting the blaze.

Improved conditions have allowed some evacuation orders to be lifted and a mountain pass road that was closed when the fire erupted will re-open on Saturday, state officials said.