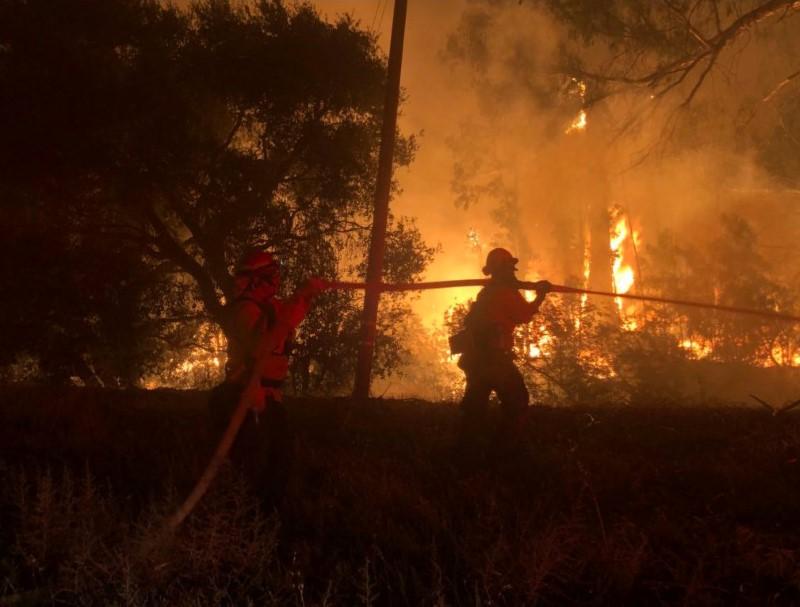 Firefighters work at the site of a wildfire in Goleta, California, U.S., July 6, 2018 in this image obtained on social media. Mike Eliason/Santa Barbara County Fire/via REUTERS

The blaze, one of dozens across the region, broke out in a building in Goleta, California at about 8:30 p.m. It spread to vegetation before burning up to 20 other buildings, fire officials said.

Video footage showed firefighters battling fires at several homes, as Santa Barbara County authorities said at least 2,200 residents were evacuated and 2,000 were without power, according to a Twitter posting.

Dozens of fires have broken out across the western United States, fanned by scorching heat, winds and low humidity.

The first death attributed to them was announced on Friday, when the remains of an unidentified person were found in a home burned to the ground by the Klamathon fire, which broke out Thursday near California’s border with Oregon.

This year’s fires had burned more than 2.9 million acres through Thursday, compared with an annual average of about 2.4 million over the last 10 years, according to the National Interagency Fire Center.

Reporting by Brendan O’Brien in Milwaukee; editing by John Stonestreet