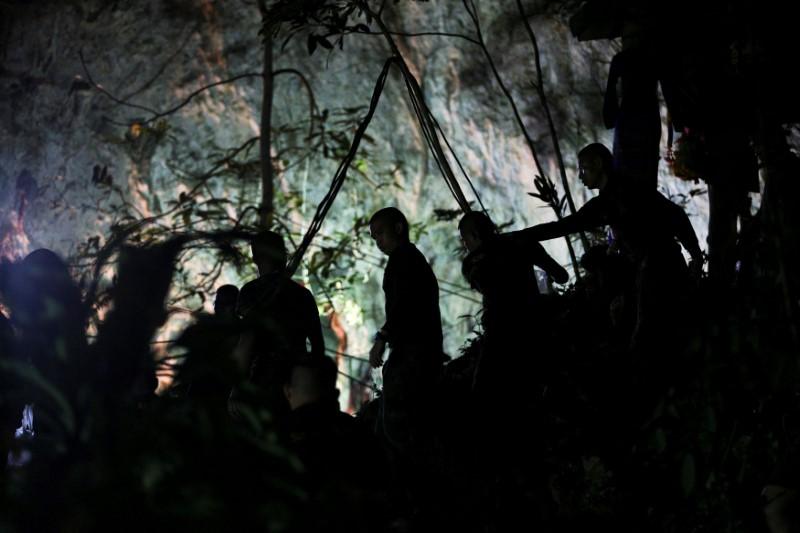 CHIANG RAI, Thailand (Reuters) – There is “limited time” to bring out 12 schoolboys and their soccer coach who have been trapped for two weeks inside a flooded cave in northern Thailand before heavy rains set in, the rescue mission’s head said on Saturday.

Military personnel are seen in front of the Tham Luang cave, where 12 boys and their soccer coach are trapped, in the northern province of Chiang Rai, Thailand, July 6, 2018. REUTERS/Athit Perawongmetha

The warning came a day after a Thai diver died during part of the rescue operation, marking a deadly turn in what started out as a celebration of one of the boys’ birthdays at the Tham Luang cave complex in northern Chiang Rai province.

A team of Thai Navy SEALS, soldiers, police and volunteers have been working around the clock to try and drain the cave. The boys, aged between 11 and 16 and not all of whom are capable swimmers, are hurriedly being taught to take on a treacherous dive through narrow, muddy, submerged passageways.

“The critical point is when it rains again … There is limited time,” Narongsak Osottanakorn, head of the rescue mission and Chiang Rai’s former governor, told a midnight media briefing.

He said he wanted to reduce risks but added that falling oxygen levels inside the cave were another “really big concern”.

Thai divers gather before they enter to the Tham Luang cave, where 12 boys and their soccer coach are trapped, in the northern province of Chiang Rai, Thailand, July 6, 2018. REUTERS/Athit Perawongmetha

Rescue alternatives include stocking the cave with supplies and an oxygen line to keep the boys alive in the cave for months until Thailand’s monsoon season ends, or drilling a shaft down into the cave from the forest above.

Narongsak said they would have to drill through 600 meters (1,970 feet) of fragile limestone rock to reach the boys and were discussing drilling angles.

(Click on the link for an interactive graphic on the rescue effort – tmsnrt.rs/2KR2zRj)

The initial jubilation around the boys’ discovery by a team of British divers on Monday has faded as the reality of the challenge of their extraction has set in.

The ordeal facing the boys was underscored by the death of a former Thai Navy SEAL in the cave on Friday morning.

However, Ivan Katadzic, a Danish diving instructor who has been ferrying oxygen tanks inside the cave, said after a dive on Friday evening he was “double positive” about the mission because the water level had dropped considerably.

Katadzic has not dived the final kilometer to where the boys are stranded on a muddy bank, the most dangerous part of the dive where rescuers have to hold their oxygen tanks in front of them to squeeze through submerged holes.

A team on the hill above is frantically trying to block holes and divert streams that channel water into the cave before the weather turns.

“Everything is a race against time”, said Kamolchai Kotcha, an official at the forest park. His team would camp out on the hill to try and finish their work before the rain came, he said.

Divers took the boys letters written by family members camped outside the cave but an attempt to send down a phone failed earlier this week.

The president of soccer’s governing body, FIFA, invited the boys on Thursday to be his guests at the World Cup Final in Moscow on July 15 if they make it out in time.