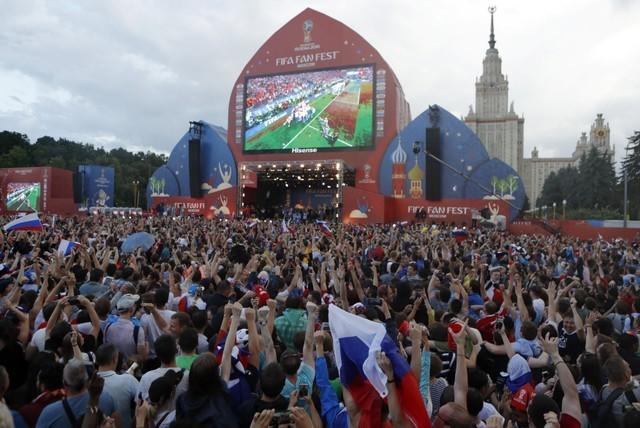 MOSCOW (Reuters) – Many Russian soccer fans believe their underdog national team can pull off another upset when they take on Croatia in the World Cup quarter-finals later on Saturday, allowing them to stay in the tournament against the odds.

“I have always believed even though I understand our chances are small,” said Alexei Lomonosov, a Russian fan attending the game in the Black Sea resort of Sochi around 1,400 km (869.92 miles)south of Moscow.

An opinion poll by state-run pollster VTsIOM, which found that most of the population planned to watch Saturday’s game on TV, showed that Russians were quietly confident.

It found that 56 percent of Russians expected their country to win the match and that 14 percent thought Russia would go on to win the tournament.

That would be a spectacular turnaround for a country that began the tournament as the lowest-ranked team and were mocked and despised by their own fans for not winning a match in eight months.

Wins against Saudi Arabia and Egypt propelled them to the knockout stage for the first time in post-Soviet history however, and to fans’ surprise and joy, Russia did not stop there.

Last week they beat Spain, the 2010 World Cup winners, coming out on top in a nerve-racking penalty shoot-out at Moscow’s Luzhniki stadium to delight the nation.

Thousands of Russians flooded onto the streets to celebrate after the final whistle, incredulous that their team had pulled off what they regarded as a famous victory.

The Russian team have pledged to do their utmost for the fans against Croatia.

“We promise to give it our all, to give everything and even more for a victory,” they wrote on Twitter. “Your support inspires us. You are the best fans in the world!”

Alexander Vorontsov, a fan from Samara who has shaved his head in the pattern of a soccer ball, said the tournament would leave a mark on sport in the country, but also on its people.

“I think that we will change our attitudes towards foreign guests (after the World Cup),” Vorontsov said. “We saw who they are in reality.”