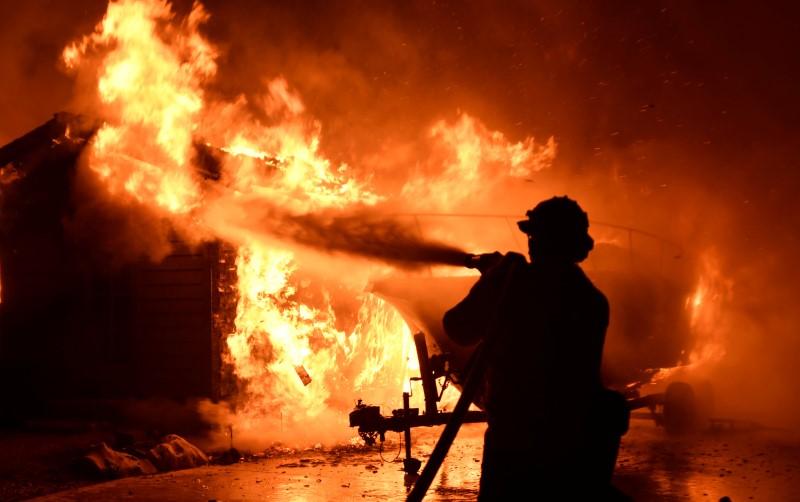 LOS ANGELES (Reuters) – Santa Barbara County officials declared a local emergency on Saturday as a fast-moving wildfire driven by strong winds and triple-digit temperatures destroyed 20 homes and other structures and forced thousands of residents to evacuate.

The Holiday Fire, one of more than three dozen major blazes burning across the U.S. West, broke out on Friday evening near the beach community of Goleta, California, South of Santa Barbara, and raced through the seaside foothills.

Some 350 firefighters took advantage of a period of light winds early on Saturday to contain as much as possible of the blaze, which has burned through 50 to 80 acres (20 to 32 hectares), fire officials said.

“It was a small fire but it had a powerful punch to it,” Santa County Fire spokesman Mike Eliason said. “We’re going to hit it hard today.”

Winds were expected to pick up again as temperatures rise in the afternoon, he said.

This year’s fires had burned more than 2.9 million acres (1.17 million hectares) through Friday, already more than the annual average of about 2.4 million acres (971,000 hectares) over the last 10 years, according to the National Interagency Fire Center.

On Friday, the remains of an unidentified person were found near a home burned to the ground by the Klamathon fire, which broke out on Thursday near California’s border with Oregon. It marked the first fatality of the fire season in California.

The Klamathon, which has destroyed 15 structures and blackened nearly 22,000 acres (8,900 hectares), was only 5 percent contained as of Saturday.

Some 3,660 firefighters faced with inaccessible terrain, high temperatures and low humidity, were battling the fire, which was only 48 percent contained. It has destroyed 10 structures, damaged two and threatened 110.

In Colorado, officials said fire crews had made “much progress” battling the Spring Creek fire, which broke out on June 27 and has consumed 106,985 acres (43,295 hectares). It was 43 percent contained on Saturday, the officials said.